The year 2014 saw many remarkable victories in Indian Sports. This field is constantly developing with the efforts of our hardworking Sportspersons. Since this is a youth-oriented area, the examiners love to ask about these achievers. Especially the bank examiners would certainly venture into this area to fish for some questions from here. Therefore, here is a short and quick revision notes for the aspirants.

Let us now, look at individual games and their achievers. 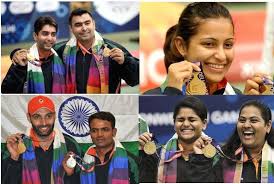 We hope this short compilation for revision about the achievements in sports for the year 2014 proves to be useful for exams coming up in next few months. If you have any other additions that can enrich this compilation, please feel free to mention it in the comments section below. We would love to entertain your suggestions.