The Gram Nyayalayas Act, 2008, mandates establishment of village courts to provide easy access to justice for people and reduce the case burden on the court system. This act requires the State Governments to establish Gram Nyayalayas with consultation of their respective High Courts.

Recently, the Union Law & Justice Minister has mentioned that state-wise progress for setting up of Gram Nyayalayas has not been encouraging and impressive. 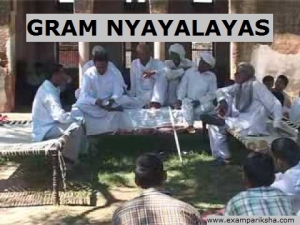 A major reason behind these non-enforcement of includes financial constraints, reluctance of lawyers, police and different government officials.

With lukewarm response of the bar, non-availability of notaries and stamp vendors, along with problem of concurrent jurisdiction of regular courts are major issues indicated by the States. These issues are coming in the way of operations of the Gram Nayayalayas.

According to the Conference of Chief Justice of High Courts and Chief Ministers of the States, it was decided that the State Government and High Court should decide the issues related to establishment of Gram Nayayalas wherever feasible while taking into account their local problems. The focus of setting up of Gram Nayayalayas is in the Talukas where these courts have not been set up.