In our democracy, asking questions is an inherent and unrestrained parliamentary right of the members.

A Question is one of the devices that is available to a Member of Parliament to seek information on matters of public importance. The questions are usually targeted on concerning subjects detail sought from the Ministries and Departments and to also force on the omissions and commissions of the government.

Parliament has a mechanism dedicated to questions, the Question Hour in which the members of parliament can ask questions on every aspect of administration and governmental activity. Government policies pertaining to national and international spheres come into sharp focus in parliament during the Question Hour.

The first hour of every sitting in both the houses of Parliament is devoted to asking and answering of questions, hence, known as the Question Hour. During this hour, the members can raise questions about any aspect of administrative activity. This type of process where elected representatives ask questions which are replied by the concerned minister or the Prime Minister, is part of parliamentary tradition in many other countries. The questions are of mainly three types; Starred questions, unstarred questions, and short notice questions.

There are four types of Questions in Parliament:

There is also the following type of question: 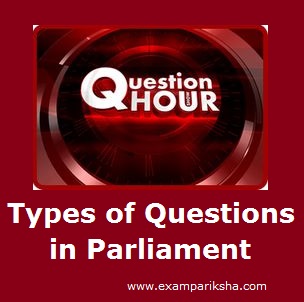 Firstly, there is no mention of zero hour in rules of Parliamentary Procedure. This term was coined by press in 1960s. A zero Hour is the the hour after the Question Hour in the two houses of Parliament. During this hour, the members raise matters of importance, particularly those which they feel, cannot be delayed. Since this is unscheduled and without permission or prior notice, it generally results in avoidable loss of precious time of the house. It also obstructs the legislative, financial and regular proceedings and business of the House.

A Half-an-Hour Discussion can be raised on a matter of sufficient public importance which has been the subject of a recent question in Lok Sabha or Rajya Sabha, irrespective of the fact whether the question was orally answered or the answer was laid on the table of the House. Generally not more than half an hour is allowed for such a discussion. The Chairman decides whether the matter is of sufficient public importance to be put down for discussion.