Just like other forms of art, dance also involves expression of all characteristics of the human mind including varied human emotions known as ‘ras‘. Human emotions have been categorized into 9 ‘rasa’ called ‘Nav-rasa‘.

Text Sources containing details of performing arts in Ancient India, which are known as earliest traditions of Indian Classical Dance are : 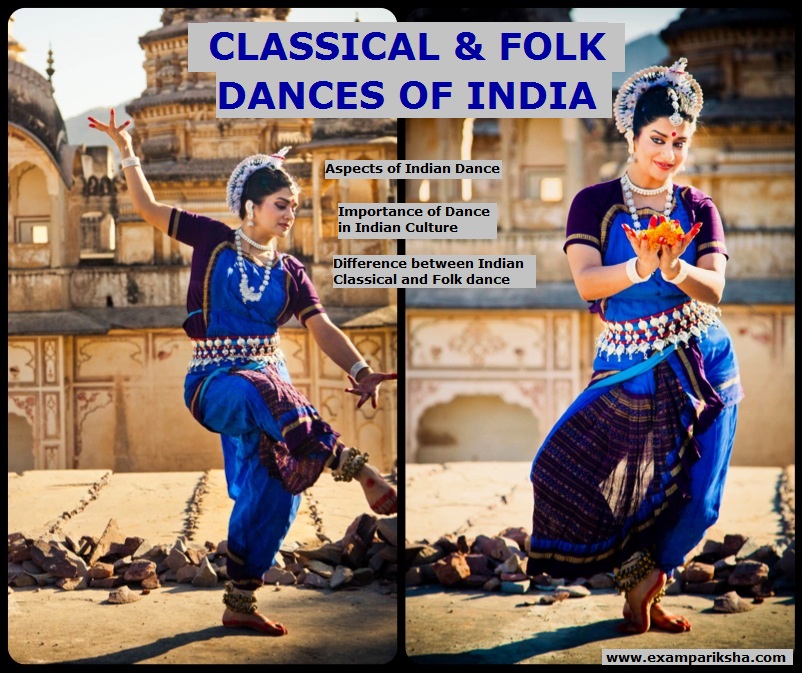 In his work Natyashahtra, Bharata has described dance and its various angas (limbs) in detail. There are three broad categories which involve facial expressions, body movements, hasta mudras and the footsteps. These categories are:

Abhinaya, broadly means expression. Expression is achieved through angika, the body and limbs, vachikasong and speech and aharya, costume and adornment; and satvika, moods and emotions.

Importance of Dance in Indian Culture

In traditional Indian culture, the function of dance was to give symbolic expression to religious ideas. Therefore, figure of Lord Shiva as Nataraja in dance represents the creation and destruction of cosmic cycle. The art of dancing may be traced to the Harappan culture which is testified by the bronze statue of a dancing girl.

Difference between Classical and Folk Dances

With time dances have come to be divided as folk and classical. The differentiating factor is generally the performance. Classical form of the dance was performed in temples as well as in the royal courts. While the dance in temples had a religious objective to please Gods , the dance in courts was used purely for entertainment.

Consider the following dances and the purpose served by them.

The Folk dances have evolved from the lives of common people and were mostly performed in unison. They are meant to serve as a medium for celebrate most of the harvesting season by giving expression to the joys and sorrows of the people-folk. The following folk dances are popular for their uniqueness.

Questions are often asked about regions to which the following famous dances are associated. Hence, the list of important classical dances of India has been presented below to give a quick reference guide for revision.

Folk dances are important part of Indian culture. Hence, aspirants should be aware of the following important folk dances of states in India to be able to answer questions in exams.

Let us know of any mistakes or omissions in this article in the comments below. Also do let us know if this short compilation of important dances of India was helpful for you. If not, tell us how we can make it better by sharing your thoughts with us. Thank you.