We are presenting here gems selected from the Economic Survey 2013-14, about the Indian industries and their role in Indian economy. Therefore, the fellow students can be sure that the data given below is latest and comes from government sources. We hope that this compilation for Economics Study Material & Notes will be particulaly useful for civil services mains paper IV exam. 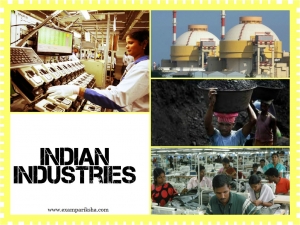 Before we begin, a brief about the Indian industry scene. Broadly, there are three major industrial economic sectors in India.

Indian Industrial sector, hence, consists of manufacturing, mining, electricity, and construction. After the economic crisis in 2008, it showed considerable recovery and steady growth for three years but then lost the track after that. This was due to constraints on both supply-side and demand-side. Therefore, Industrial performance in 2013-14 has maintained its lackluster growth for the second successive year.

These snippets from the economic survey will be useful for the Essay paper also. We will keep updating the data as new statistics release. You can bookmark the page for future reference. More articles will be added to the Economics study material & notes section.