What is the need to focus on Micro and Small Businesses

According to NSSO survey of 2013, there are 5.77 crore small business units running in India, majority of them are individual proprietorships, which run small trading, manufacturing or services activities. According to the Union Budget 2015-16, 62% of these are owned by people belonging to Scheduled Caste, Scheduled Tribe or Other Backward Classes. The matter of concern here is that only 4% of such small business units get institutional finance. If these units are provided access to institutional finance, these micro units would turn into strong instrument of increasing employment and GDP growth for the economy.

What is Micro finance?

Micro Finance is an economic development tool to assist the poor so that they can work their way out of poverty. Microfinance covers a range of services, such as providing provision of credit, savings, insurance, money transfers, counseling services. The actors in the Micro Finance sector can qualify into 3 main groups:-

Employment generation is a big priority for government since 54 %per cent of the Indian population is under 25 years of age and about 12 million workers join the workforce annually.To boost entrepreneurship, Union Budget 2015 has announced a Rs 1,000 crore corpus for a new fund Self-Employment and Talent Utilisation (SETU) fund which would support all aspects of start-up businesses and self-employment activities, especially in technology-driven areas.

Micro Units Development Refinance Agency (MUDRA), has been envisioned as a bank to finance the setting up of small and micro-units (SME) and hence encourage entrepreneurship among the SC/STs and OBCs. This proposed bank is a part of government’s Skill India programme and is focussed on job-creation. 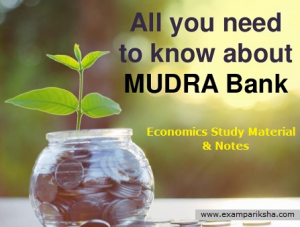 MUDRA bank has been structured as an apex refinancer to enable over 50 million unfunded entrepreneurs to access the systems of formal credit through credit institutions registered under it. These micro/small entrepreneurs not only earn their own livelihood but also provide jobs. These small business units need credit at a reasonable interest, rather than subsidies (the idea of inclusive growth has so far been associated with subsidies).

MUDRA Bank will fund micro business units which are more efficient than the modern corporates.  The following analysis will explain this:

The Economic Census 2014 also mentions that while the 57.7 million micro units provide employment to 128 million people, the banks fund only 4 % of their needs. The Small business units get just Rs. 46,000 crore out of their gross assets of ₹11.5 lakh crore from bank funding.

In comparison, the modern Indian corporates in the public as well as private sector have absorbed over Rs. 50 lakh crore through the FDI and FII investments and bank credit since the year 1991, but have added just 2.8 million jobs. 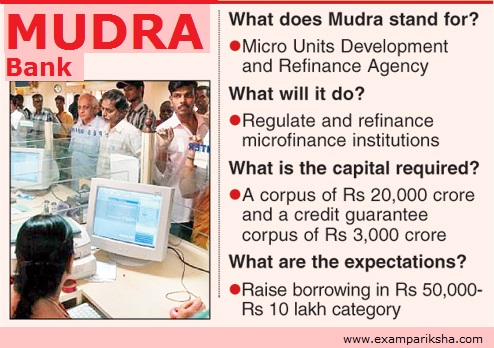 The government will set up the Micro Units Development and Refinance Agency (MUDRA) Bank through a statutory enactment. It was announced in the Union Budget 2015-16.

The MUDRA Bank will be responsible for regulating and refinancing all Micro-finance Institutions (MFI) which lend to micro and small business entities that are engaged in manufacturing, trading and services activities.

How MUDRA bank will be helpful?

The above mentioned measures will not only help in increasing the access of finance to the unbanked sections of economy but also bring down the cost of finance from the Last Mile Financers to the micro and small enterprises in the informal sector.

Therefore,  this new bank that was announced in the annual Budget 2015 could possibly boost loans and also cut borrowing costs for the cash-starved small businesses such as tailors, small shops, mechanics, phone booth operators and other micro businesses which account for around a fifth(5th) of the economy. This will work in tandem with the approach of government to bank the un-banked and fund the un-funded.