The most prestigious film award ceremonies of the country, the 62nd edition of National Film Awards have been announced in New Delhi. The jury comprised of Bharathiraja and Kamal Swaroop. The National Film Awards are presented by the Directorate of Film Festivals under the Ministry of Information and Broadcasting. The following were the chairpersons of the three juries.

The National Awards are meant for promoting the quality of good cinema in the country. The following categories of the award have been conferred on following recipients: 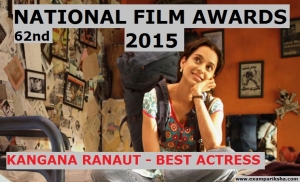 In bank exams, a few questions may be asked from this topic, therefore candidates must prepare thhis complete list as part of GK for exams.