Every year, the Royal Swedish Academy of Sciences, and the Norwegian Nobel committee announces a series of prizes that have been established in the will of Alfred Nobel, a Swedish inventor and wealthy industrialist. He invented Dynamite. His will provides very few directions about the procedure to select winners, but mentions that those contributors should be rewarded who “have conferred the greatest benefit to mankind”.

The six Nobel prizes are handed out on 10 of December every year, which is the anniversary of Alfred Nobel’s death in 1896.

One should remember that the awards in physiology/medicine, physics, chemistry, literature and peace were first awarded in 1901 in accordance to Nobel’s will. However, the economics prize was created later in year 1968.

Let us look into the Nobel prize winners 2014 and their contributions that won them the award.

Jean Tirole is a French economist, working in the Toulouse University. His work on analysis of market power and regulation especially with reference to taming powerful firms has been rewarded. His study sheds light on how governments should regulate powerful companies and firms that dominate markets.

If these firms are left unregulated these firms can lead to several undesirable results for the economy in for of unnecessary high prices or worse, unproductive industries that block entry of new firms. This work has useful insights for governments in dealing with mergers or cartels, also about how they should regulate monopolies.

An Indian child rights activist Kailash Satyarthi and Malala Yousafzai, a Pakistani girl who is fighting Taliban, have found their names in the Nobel prize winners 2014 list. They have been  chosen for the Peace prize by the Prize committee for “their struggle against the suppression of children and young people and for the right of all children to education.” Kailash Satyarthi, has showed “great personal courage” and “maintaining Gandhi’s tradition, has headed various forms of protests and demonstrations, all peaceful, focusing on the grave exploitation of children for financial gain” in recovering thousands of children from shackles of child labour across India.

Malala Youssafzai has been fighting for rights of girls to education despite her youth. She is seen as an example for  children and young people who can contribute to improving their own situations like her. 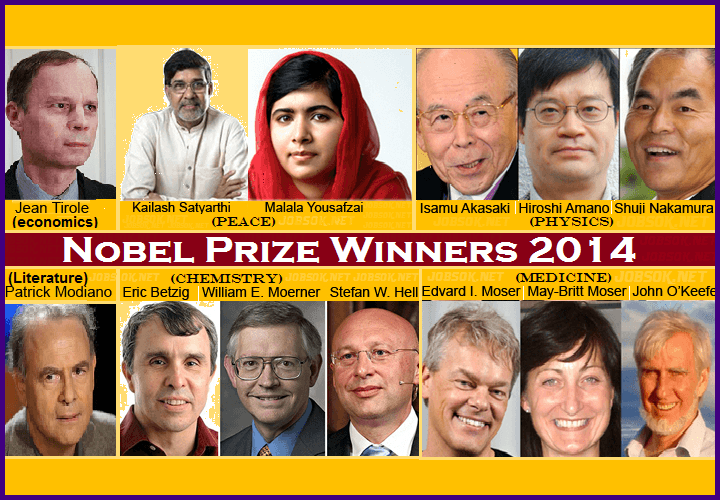 French author Patrick Modiano has been awarded the Nobel prize for Literature for his works that are focused on the Nazi occupation and its effect on his country France. The Nobel committe has awarded him “for the art of memory with which he has evoked the most unfathomable human destinies and uncovered the life-world of the occupation.”

His best known novel is “Missing Person”  about a detective who loses his memory and struggles to find it. His other works revolve around the theme of memory, time and identity. He often describes in detail about the Nazi occupation during the World War, Jewishness, and loss of identity recurrently in his novels.

Two Americans and a German have received the 2014 Nobel Chemistry Prize. They are- Stefan Hell of Germany, William Moerner, and Eric Betzig of United States. As the Award Committee puts it, they have been awarded for “the development of super-resolved fluorescence microscopy”.

These scientist have developed the techniques which allow scientists to look inside nerve cells, to track proteins which cause disease and also to watch cells dividing in living embryos . This was made possible by these scientists  who overcame a fundamental barrier which was preventing the improvement of the resolution of optical microscopes. Their work  has showed that it is possible to observe features even at the scale of billionths of a metre.

This theoretically leaves no structure as too small to be studied. The groundbreaking work has now brought optical  microscopy into the nano-dimension, thus opening new vistas.

Shuji Nakamura, Isamu Akasaki and Hiroshi Amano of Japan, have been awarded the Nobel Physics Prize 2014. This award is being given for “the invention of efficient blue light-emitting diodes which has enabled bright and energy-saving white light sources”. This invention of the blue LED has transformed lighting and led to development of the Blu-ray technology for storage of data.

Based on this bright blue LED, that has been discovered by these scientist, it becomes possible to make white LEDs  which have widespread use all over the world for solid state lighting.

It is a very remarkable discovery considering that about a quarter of the world’s electricity is used solely for lighting. The devopment of white LEDs saves a lot of energy across the world.

Advantages of White LEDs: These are energy efficient is already established. They start emitting light instantly unlike other energy efficient devices which take a while. They have a lifespan of 11 years with continuous use. Considering that the average light-bulb is on for 4 hours in a day, a white LED light could then last for approximately 60 years with normal use.

Other uses of Blue light LED: Blue light has a shorter wavelength than other lights, hence it can store far more information. This increased storage capacity has led to the development of Blu-ray discs. this has transformed the storage sector.

The 2014 Nobel Prize in Medicine has been awarded to British-US scientist John O’Keefe and a married couple May-Britt and Edvard Moser belonging to Norway. This award is being presented for discovering the brain’s “inner GPS” cells.

The discovery is about the neurons in the hippocampus area of Brain that possess “place fields”. These place fields  fire when an animal is in a particular spot of its environment. This discovery has revolutionised the understanding of how the brain comes to know about our location and how it is able to navigate within our surroundings.