Let us study the following sentences:

Hearing the noise, the girl woke up.

The word hearing qualifies the noun ‘girl’ as an Adjective does. It is formed from the Verb Adjective, and is called a Participle. It may be called a Verbal Adjective. A participle is that form of the verb which partakes of the nature both of a verb and of an Adjective.

It must be noted that phrase ‘hearing the noise’ which is introduced by a participle, is known as participle phrase. According to its use here, it is an Adjective phrase.

Study the following examples regarding Participle:

We met a boy carrying a basket of flowers.

The child, thinking all was safe, attempted to cross the road.

He rushed into the field, and foremost fighting well.

In the above are all examples of what is usually called the Present Participle, which ends in -ing and represents an action as going on or incomplete.

Besides the Present Participle, we can verb another Participle called its Past Particle, which represents a completed action or state of the thing being talked about. For instance;

Deceived by her friends, she lost all hope.

Apart from these two simple participles, the Present and the Past, we have a Perfect Participle which represents an action completed in some time in past. Such as;

Having rested, we continued our journey.

In the following examples the Participles are used as simple qualifying adjectives in front of a noun, therefore this usage terms them as Participle Adjectives.

A rolling stone gathers no mass.

A lying witness ought to be punished. 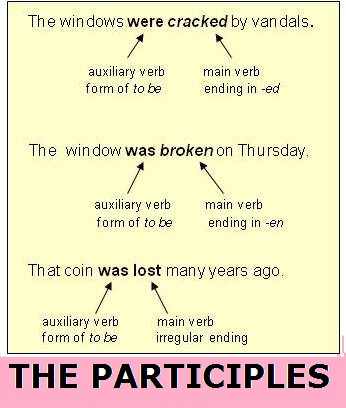 Therefore, Participles can be summarized as following:

1. A participle is a verbal Adjectives.

2. Like a Verb it may govern a noun or pronoun. Such as;

Hearing the noise, the girl woke up. (Here the noun ‘noise’ is governed by the participle ‘hearing’)

3. Like a Verb it may be modified by an adverb. Such as;

Loudly knocking at the gate, she demanded admission. (Here the participle ‘knocking’ is modified by the adverb ‘loudly’)

4. Like an adjective the participle may qualify a noun or pronoun. Such as;

Having rested, the women continued their journey.

5. Like an Adjective it may be compared. Such as;

Education is the most pressing need of our time. (Here the participle ‘pressing’ is compared by prefixing ‘most’)

The use of present participle forms Continuous tenses (active voice) with tenses of the verb. Such as;

The perfect tenses in active voice are formed from the past participle with tenses of the verb ‘have’. Such as;

The passive voice is formed from the Past participle with tenses of the verb be. Such as;

We have so far seen that Participles qualify nouns or pronouns. They may be used in following ways –

3. Participles used absolutely with a noun or pronoun going before it. For example;

The wind being favorable, they embarked on the journey.

God willing, we shall have another great monsoon season.