A girl is singing in the park.

Some girls are singing in the park.

He bought a book to prepare for the examinations.

Most schools have computers for students.

The nouns which refer to general things such as quality, substance, state, action, etc. have only one form – singular. Such nouns are called uncountable nouns(the nouns which cannot be counted). These nouns are not usually used with numbers or determiners like a, an or the. For instance;

Students with intelligence can solve this problem. 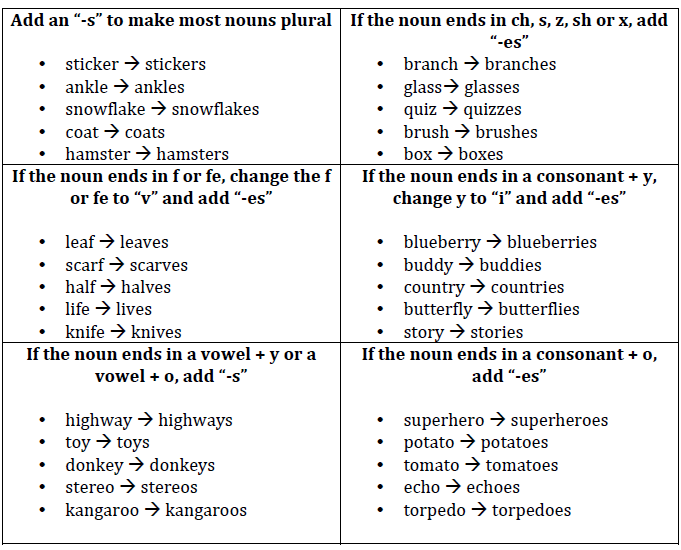 The following nouns have the same form both in the singular and the plural. For instance;

I saw some sheep grazing in the field.

The pond is full of fishes.

When units of counting such as pair, dozen, hundred, thousand, score, gross, etc. are preceded by a definite number, these should always be used in singular number. For instance;

I bought three dozen pencils for my son.

The following collective nouns appear singular in form but are always used as plurals. For instance;

Cattle were grazing in the field.

These cattle are not allowed to graze here.

The following nouns appear plural in form but are used as singulars. For instance;

Billiards was gradually replaced by bridge.

The following nouns are used only in the plurals. For instance – valuabes, ashes, contents, wages, proceeds, etc.

In a compound word, when a noun does the function of an adjective, it should always be used in the singular though it may be preceded by a number. For instance;

Some nouns have one meaning in the singular and two in the plural.

Some nouns have two meanings in the singular and one in the plural.

When we talk about one person or thing out of a group of people or things, the expression should be as –

One of + the + plural noun + singular verb

When one noun is followed by another noun to describe it, the noun which follows is said to be in apposition to noun which comes before it. A noun in apposition is in the same case as the noun that is explained by it. For instance;

Tagore, the great reformer, was a writer.