The concept of ‘Syllogism’ was introduced by Aristotle, it means ‘inference’ or ‘deduction’. Syllogism is important  part of almost every competitive exam with Logical Reasoning. These questions are generally easy to solve if correct train of thought is maintained while approaching the question. Since the questions related to syllogism form a promising part of the competitive exams like various bank exams like IBPS, RBI, SBI associate Clerk, RRB as well ass in UPSC CSAT, SSC and others. If candidates go through the following explanation regarding syllogism with little practice and concentration.

First let us look at some basic terms used in the rules of syllogism and try to understand them.Generally, there are two parts in syllogisms – Premises / propositions and Conclusions/inference.

A premise or proposition is a sentence which makes a statement and hence, gives a relation between two or more terms. In logical deductions, any statement is termed as proposition or premise. For example;

There are the following parts of proposition or premise as explained below:

Premises usually start with the words- All, No, Some and Some–not.

Premises are divided into Universal and Particular statements, they are also divided into positive and negative statements. The following are basic types of premise: 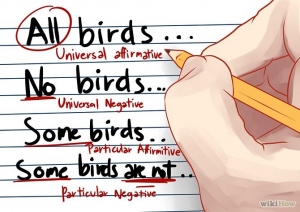 i) Universal positive proposition: A premise of
the form

Inference or Conclusions in syllogisms:

In syllogism, there are two major types of inferences, these are:

Rules for Deductions in Syllogisms

We take explanations of each major type of profile under syllogism examples to understand the deductions in syllogism.

As the first statement is universally affirmative sentence and so is the second sentence. The type of sentence that satisfies both of the given statement, is Universal affirmative statement, that is a statement with ‘All’. Hence, the answer will be

By following the given premise, it can be concluded that ‘Smoking is rash driving’.

The middle term ‘cats’ is not distributed in either of the two statements. Hence, we cannot draw any conclusion from the given case.