Let us first look at basic relationships which often figure in the questions. If you are conversant with the given items in the table below, half of your battle is already won. It is not required to mug-up these names, but instead make a clear picture in your mind as you go through each one of them. This will go a long way in retaining the details of these given shortcut tricks for solving Blood relations problems for logical and analytical reasoning. Read the following thoroughly before moving on:

If you are able to comprehend the given information quickly in exams, then just pocket-solving of the question will lead you to the answer. Generally, this method allows for quick solution of the blood relation questions.

If the question asks about Single person blood relation, then follow the following steps for solving the question.

Step 1: Simplify the given blood relations as much as you can. For example, Father’s Son would be me,etc.

Step 2: Break the given sentence at “is/as/was” to reach the answer quickly.

Step 3: Check the answer by going backward in the given sentence.

Let us take an example, Questions says – Pointing to a photograph, a lady tells Pramila, “I am the only daughter of the lady and her son is your maternal uncle.” How is the speaker related to Pramila’s father?

Solution – Now, ‘only daughter of the lady’ – refers to speaker’s mother (which is not important for our question, so leave it there)

In these problems, there are more than one persons mentioned. The mutual blood relations type of problems can be solved with the help of diagrams and family trees. Sometimes, when there are quite many characters in the problem, one should use symbols to mark the details to avoid confusion.

Generally the following symbols are used:

Let us give an example to help you understand the process.

Question – Anil and Bimal are brothers and Chandani and Damini are sisters. Anil’s son is Damini’s brother. How is Bimal related to Chandani?

Solution:- The individuals in the given blood relations problem can be denoted by using just the first letter of the name to further simplify. The blood relations tree of this question would look like this; 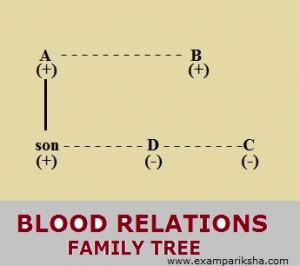 Now, you can see yourself that here, A and B have been denoted with ‘+’ while C and D are denoted with a ‘-‘ symbol with them. This process even when used for depicting larger trees would keep it simple. Since the question says that Anil and Bimal are brothers, hence belong to same generation, which is shown by the ‘- – – -‘ symbol. Similarly Chandani and Damini are also shown with the dotted line symbol to show their similar generation.

With the help of the above diagram it becomes clear that Bimal is UNCLE of Chandani. Hence, the answer to the question How is Bimal related to Chandani? is – He is Chandani’s uncle.