Questions based on UNESCO World heritage sites in India can come up in every exam which tests General awareness of the candidates. Since these sites are just a handful, they give good return reward in form of marks. Hence, we suggest you go through these UNESCO sites every now and then to ensure those easy marks. You can bookmark this page(CTRL+D) and refer to it as and when your time permits. These trivia is helpful for study break time- utilization as well.

The General Conference of UNESCO in 1972 adopted a resolution for  ‘Convention concerning the protection of the World Cultural and Natural Heritage’.

Its main objective was to define the
World Heritage in both cultural and natural aspects and to enlist Sites and Monuments from the member countries which are of  interest and universal value, the protection of those is the concern of all mankind and to promote co-operation among all Nations and people to contribute for the protection of these universal treasures intact for future generations.

The List of recorded sites on the World Heritage is 981 which include both cultural and natural wonders. These include 759 cultural, 193 natural and 29 mixed properties in 137 state parties.

India being an active member State on the World Heritage forum since 1977 and has been working in close co-operation with other International agencies like ICOMOS (International Council on Monuments and Sites), IUCN (International Union for the Conservation of Nature and Natural Resources) and ICCROM (International Centre for the study of Preservation and Restoration of Cultural Property).

The names and year of induction in the heritage list are marked alongside below: 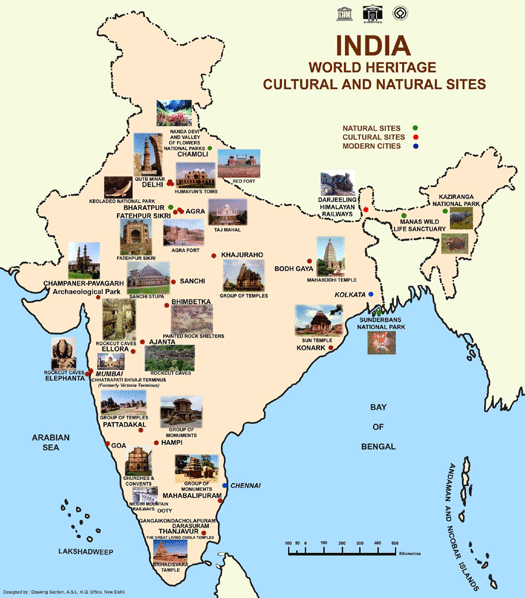 Kanchenzanga National Park (2016) – Has both natural and cultural heritage value.

P.S. These sites are important for history, geography and environment general knowledge.

The UNESCO World Heritage Sites in India are also a reminder of our rich cultural and natural heritage. These Indian heritage sites of UNESCO have the potential to attract a large number of tourist. Therefore, this recognition of UNESCO world heritage site is critical for the growth of the Tourism Industry in India.

If you want us to make any additions to the article above, feel free to drop your comments in the section below. We would love to hear from our readers.