In this article we are providing detailed information regarding White Label ATMs.

The ATMs or Cash dispensing machines, that are owned and operated by Non Banking Financial Corporations (NBFC) are known as White Label ATMs. These WLAs provide the banking services to the customers and clients of banks in India. In order to begin operations of White Label ATMs,  the non-bank corporations must have the net worth of at least Rs 100 crore.

Prior to setting up of WLAs, only banks were allowed to set up ATMs in India. And majority of these ATMs were covered up in urban areas. Between the years 2008 – 2011 although, nearly 23-25 % growth in the number of ATMs was seen in Tier I and Tier II cities. However, in Tier III & IV cities, the network of ATMs has remained sparse. Thus, RBI decided to rope in private operators to expand the ATM network across a broader customer base. To achieve this, the RBI reviewed the extant policy on ATMs and permitted non-bank entities that are incorporated in India under the Companies Act 1956, to set up and operate ATMs in India. The Reserve Bank of India released the guidelines on “White Label Automated Teller Machines(WLAs) in India” on 20 June 2012. 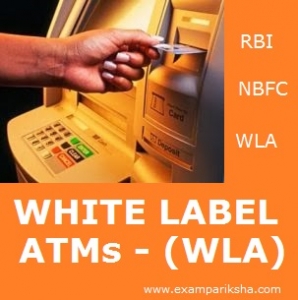 What are Brown label ATM?

‘Brown label ATMs’ are those ATMs (Automated Teller Machines) which have their hardware and the ATM machine lease is owned by a service provider, while the cash management and connectivity to the banking networks is provided by a sponsor bank. The brand name of the sponsor bank is used on the Brown label ATM. The Brown label ATMs in India have began to come up as an alternative between the bank-owned ATMs and the ‘white label’ ATMs (which have just begun after approvals were granted in 2012 by RBI).

The Status of Brown label ATMs in India :

Influenced by high cost of ATM machines and also RBI’s guidelines for expansion of ATMs, banks are increasingly expanding their ATM network by means of Brown Label ATMs. There are indications that as many as 50% ATMs by banks may soon be under this category.  However, with coming of white label ATMs, the scenario for expansion of ATMs will change over time.

So far, the banks have played major role in setting up and encouraging usage of Automated Teller Machines (ATMs) in India. The total number of ATMs set up in India by public, private and foreign banks is around 90,000 ATMs across India, but they are mostly concentrated in the urban areas and cities. While, the other parts of country especially, the tier III to tier VI cities have not seen any substantial growth in number of ATMs, which could have popularised the personal banking in rural areas and could have played an important part in financial inclusion.

Therefore, RBI has relaxed its policy about setting up of ATMs and has allowed the participation of non-banking financial institutions to set up the White Label ATMs. These White Label ATMs are owned and operated by the NBFCs while functioning just in the same way as any other bank-run ATM does.

What is a White Label ATM (WLA)

White Label ATMs are operated by a non-bank entity where customers from any bank may withdraw money.  WLAs are ATMs that are deployed by the non-banking financial companies which charge banks a fee whenever the account holders transact. A white-label ATM (WLA) is not owned by a bank but by a private service provider and established under Payments & Settlements Act of 2007.

White Label ATMs are mainly aimed at achieving financial penetration across Tier-I to Tier-VI regions of the country particularly in semi-urban and rural areas. Customers of any bank in India can access these White Label ATMs.

First White Label ATM was set up by Tata Communications Payment Solutions, by the brand name of ‘Indicash‘.

Since White-label ATMs were introduced to increase the ATM network in semi-urban and rural areas, the RBI has taken measures to ensure this reach. The companies in the WLA segment are mandated to operate 67 % of their ATMs in rural locations (which are tier III to tier VI areas) and remaining 33 % in urban areas (comprising tier I and II cities).

A NBFC or non banking entity has to either of the following schemes for setting up ATMs in India:

Under the scheme A, the NBFC has to follow the given guidelines for establishing financial penetration in various areas.

Under the scheme B, the NBFC has to establish:

Under the scheme C, the NBFC has to establish:

Classification of Indian cities: The RBI classifies areas/regions into 6 tiers based on their population.

According to the Population (2001 Census) -the centres are classified according to following groups:

The white label automated teller machines(ATM) are likely to benefit customers as well as banks.