The Edicts of Ashoka are in total 33 inscriptions written on the Pillars, boulders and cave walls of Mauryan Period, during the reign of the Emperor Ashok that are dispersed throughout the Indian Sub-continent covering India, Pakistan and Nepal.

These inscriptions are divided into three broad sections –

These edicts have mentioned that Buddhism as a religion had reached as far as Mediterranean under the Ashokan reign. Many Buddhist monuments had been created in the wide-spread area. In these edicts, Buddhism and the Buddha are also mentioned. But primarily these edicts focus more on social and moral precepts rather than the religious practices (or the philosophical dimension) of Buddhism during Ashoka’s reign.

Language used: The inscriptions found in the eastern parts of Mauryan empire are written using the Brahmi script in  Magadhi language. While in the western parts of the empire, the script used is Kharoshti, written in Prakrit. To add to the variety, one extract in the Edict 13 is written in Greek and Aramaic.

The world came to know of these details of Mauryan empire and Ashoka when the edicts and inscriptions were decoded by British Archaeologist James Princep.

There are fourteen major rock edicts in series and two separate.

Major Rock Edict I – It Prohibits animal slaughter and bans festive gatherings. he mentions that only two peacocks and one deer were being killed in Asoka’s kitchen which he wanted to be discontinued.

Major Rock Edict II – This edict provides for care for man and animals. It also describes the presence of Pandyas , Satyapura and Keralputra Kingdoms of South India.

Major Rock Edict III – It mentions and guides about Generosity to Brahmans. This edict was issued after 12 years of Asoka’s coronation. It tells about the Yuktas which were subordinate officers and Pradesikas (who were district Heads) accompanied with Rajukas (Rural officers) would go to the all the parts of the kingdom every five years to spread the Dhamma Policy of Ashoka.

Major Rock Edict IV – It says that Dhammaghosa(sound of righteousness) is ideal to the mankind and not the Bherighosa(sound of war).  It also talks about the impact of Dhamma on the society.

Major Rock Edict V – It concerns about the policy of people towards their slaves. “Dhammamahamatras” are mentioned in this edict as appointees of the state.

Major Rock Edict VI – This describes the King’s desire to stay informed about the conditions of the people  of his regime constantly. Welfare measures for the people.

Major Rock Edict VII – Ashoka requests tolerance for all religions and sects. This is repaeted in 12th edict.

Major Rock Edict X – It condemns the desire for fame and glory of individual and stresses upon popularity of Dhamma.

Major Rock Edict XII – Here also he request for tolerance among different religions and sects, as mentioned in 7th edict.

Major Rock Edict XIV – This describes the engraving of inscriptions installed in different parts of country. 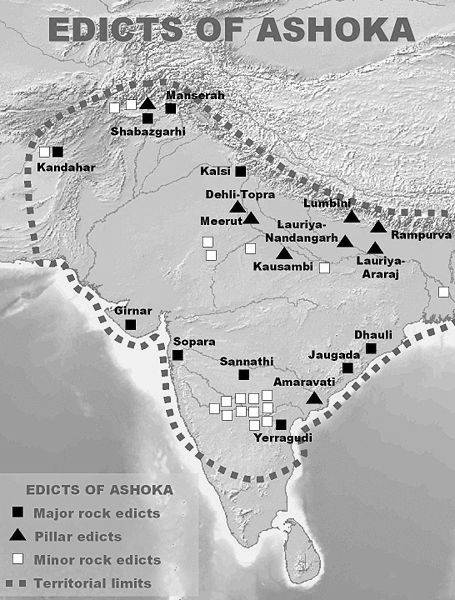 These are inscribed on 15 rocks found across India. Minor Rock Edicts have been found at various locations. It is interesting to note here that, Ashoka has used his name only at these four places. Maski in Karnataka; at Brahmagiri in Karnataka; at Gujarra in Madhya Pradesh; at Nettur in Andhra Pradesh.

The pillars edicts use two types of stones. One type is a spotted, white sandstone sourced from Mathura. Another type is a Buff colored Sandstone and Quartzite sourced from Amravati. There are a total 11 pillars that have been found in India and Nepal. These are found at Topra (Delhi) , Meerut, Kausambhi, rampurva, Champaran, Mehrauli, Sanchi, Sarnath, Rummindei, and Nigalisagar. All of these pillars are monolithis( made from single rock).

Pillar Edict I – It mentions about Ashoka’s principle of protection to people.

Pillar Edict III – It abolishes the practice of harshness, cruelty, anger, pride among his subjects as sins.

Pillar Edict IV – It deals with duties of Rajukas.

Pillar Edict VI – It describes the Dhamma Policy of the state.

Pillar Edict VII – It describes the works done by Ashoka for fulfilment of the Dhamma Policy. He observes that all sects desire self control as well as purity of mind.