Prior to Britih colonial rule, India was well known for its handicraft industries dealing with cotton and silk textiles, metal and precious stone works, etc. These products manufactured in India had a worldwide market due to fine quality of material used and high standards of craftsmanship employed in the exported products.

With coming of British colonialism in India, the economic policies followed by British were more concerned about protection and promotion of the economic interests of their own country rather than development of Indian economy under British rule.

The policies followed by the company rule brought about a fundamental change in the structure of the Indian economy, transforming India into a supplier of raw materials and a consumer of finished industrial products from Britain. 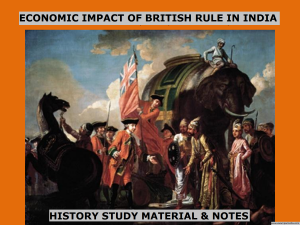 There were three broad stages of British Colonialism in India. The economic impact of British rule in India is also studied under these stages to assess the full meaning of British rule.

The East India Company began to use its political power to monopolize the trade in India. It dictated the terms of trade in its dealings with the traders and merchants of Bengal. The Company imposed inflated prices of goods leading to adventurous capitalism whereby the wealth was created by the political clout of the British traders. The revenue collected from Bengal was used to finance exports to England.

With development of British industries, India was exploited by its colonial masters as a market for British goods. With coming of the act of 1813, only one way trade was allowed by the British, as a result of which, the Indian markets was flooded with cheap, machine-made imports from newly industrialized Britain. This led to loss of Indian market and foreign market for traders of the country.

Now, Indians were forced to export their raw materials to Britain and import the finished goods. They imposed  heavy imports duty on the Indian products exported to England in order to discourage them in the British market.

After the British consolidated their position in India they converted India into a market for British manufacturers while still being a supplier of foodstuffs and raw materials. In the second half of the 19th century, modern machine based industry started coming up in India. With the Introduction of Railways in 1853, and Post and Telegraph being  introduced in year 1853 as well. There was a rush of foreign investment in India mainly lured by high profits and availability of cheap labour, raw materials. The Banking System was introduced in form of Avadh Commercial Bank in year 1881.

Home grown Industries came into existence  in form of Tata Iron and Steel in 1907. Socially, this led to the rise of an industrial capitalist class and a working class became important feature of this phase.

Economic Drain or Drain of Wealth

The economic drain theory was put forward by Dadabhai Naoroji in his book “Poverty And Un-British Rule in India” in 1867. It stated major components of this drain in form of salaries and pensions of civil and military officials, along with interests and loans taken by the Indian Government from abroad. Other contributors were profits from foreign investment in India, shipping payments, banking and insurance services which restricted the growth of Indian enterprise in these services.

This drain of wealth retarded and checked capital formation in India. While this same wealth accelerated the economic growth in British economy.

The ‘Economic Drain’ theory  mainly refers to a portion of National Product of India which was not available to Indians for consumption.

Following were the constituents of ‘Drain of Wealth’: