Till 18th century, Indian agriculture and cottage industries had a very strong relation. India held prominent place in field of agriculture and handicraft production in the world. The coming of British colonial rulers destroyed handicraft industry while causing far-reaching changes in country’s agrarian structure by introducing novel systems of land tenure and policies of revenue administration.

Let us study each one of these Land revenue system and land settlements under British rule in India. 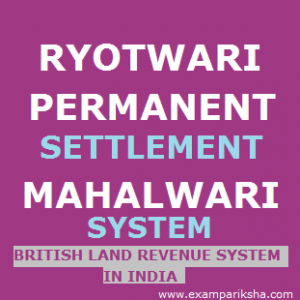 It was introduced in Bengal, Orissa, Bihar and districts of Benaras by Lord Cornwallis in 1793. John Shore planned the Permanent Settlement.

Absentee Landlordism : Since zamindars were assured of their ownership of lands, many of them stayed in towns. They entrusted rent collection to agents who even extracted illegal taxes besides the legal ones from the tenets.

After increase in prices, company suffered financial loss because land productivity was high while income from it was meagre.

It was introduced in Bombay, Madras, Assam and Berar. Sir Thomas Munro introduced it in Madras. It was during the term of Lord Hastings.

Even while the position of cultivator became more secure, but the rigid system of revenue collection forced ryots into the hands of moneylender.

Since the government itself became a big zamindar, it had right to enhance revenue at will. The cultivator was left at the mercy of the collecting officers.

In 1833, the Mahalwari System was introduced under Wlliam Bentinck . This was basically a modified form of the zamindari system/settlement introduced in the Ganga valley, Punjab, North-west Frontier Province, parts of Central India.

Since the government revised the revenue periodically, the peasants had not much benefit of elimination of middlemen between the government and the village.

This brought about some improvement in irrigation facilities, though major benefits of the system were largely enjoyed by the government.