Questions regarding Basic Structure of constitution feature as a fixture in all General Awareness papers, especially UPSC exams like SSC, IAS, civil services, etc. these are also a staple in all the state PSC conducted exams. Here we are providing a brief material for quick revision as well as reference for benefit of fellow aspirants. These points will serve well for the Essay papers also. 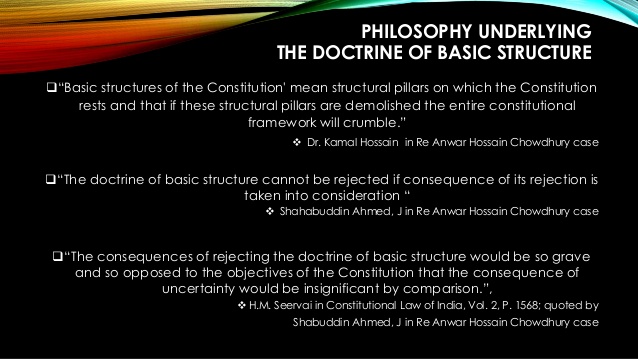 The basic structure doctrine is not mentioned in the constitution, yet it has been developed over the years.

There are three critical milestones in Indian constitution’s path to achieve the basic structure doctrine:

2.  Supreme Court in Golak Nath’s case (1967 ) opined that no limitations can be and should be implied upon the power of amendment under Art. 368 but held that Fundamental Rights cannot be taken away by an amendment.

3. In Kesavananda’s judgment (1973) where the Supreme Court deliberated that emerges out of it is that the amending power of the constitution cannot be used to interfere with the basic structure of the Indian constitution.

The following listed provisions are widely accepted constituent of ‘basic’ structure of the constitution:

These provisions are given by the interpreter of the constitution, the Supreme Court.