Making of the constitution

The Constitution of India was framed by the Constituent Assembly which was constituted in 1946 under the Cabinet Mission Plan.

There were proposed 292 members of the Constituent Assembly to be indirectly elected by the members of the existing Provincial Assemblies by the method of proportional representation with single transferable vote. In addition, there were 93 members nominated by the rulers of the Princely States. Seats in each province were distributed among three main communities- General, Muslim, Sikh proportional to their population.

Following the partition of the country in 1947, the membership of the assembly was reduced to 299 members. Of these 229 members were elected by the provincial assemblies and the rest were nominated by the rulers of the princely states. Majority members belonged to the Congress party.

The Assembly worked with the help of a large number of committees and sub-committees. The committees were of two types :

The Constituent Assembly met for 166 days spread over a period of 2 years 11 months and 18 days. There were 11 sessions of the assembly.

IMPORTANT COMMITTEES OF THE CONSTITUENT ASSEMBLY AND THEIR CHAIRMEN

The ‘Objectives Resolution’ was moved by Jawahar Lal Nehru in the Constituent Assembly on December 17, 1946 which was almost unanimously adopted on January 22, 1947.

Jan. 26, 1930 was decided in the Lahore session of the Congress in Dec 1929 to celebrate as Independence Day. Hence, January 26, 1950 was decided as the day to enforce the constitution to commemorate the first independence day celebration.[/box]

This Resolution was unanimously adopted by the Constituent Assembly on 22 January 1947. In the light of these ‘Objectives’ the Assembly completed the task of constitution making by November 26,1949. The constitution was enforced with effect from January 26, 1950. From that day,  India became a Republic. 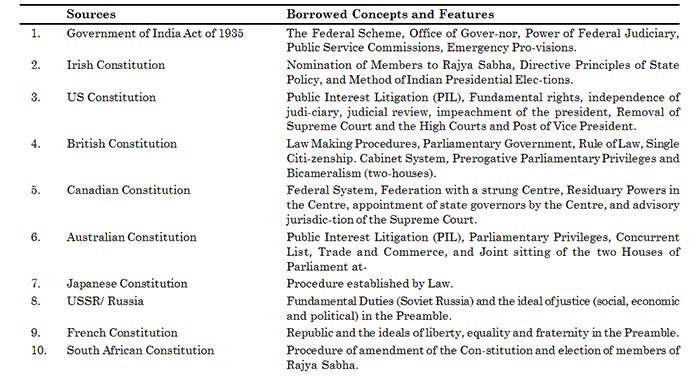