Continents cover 29 percent of the surface of the earth and remainder is under oceanic waters. Alfred Wegner was a German meteorologist who put forth the Continental Drift Theory in 1912. 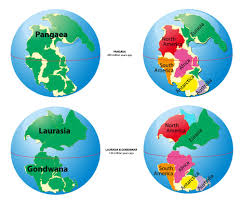 The basic argument was that – About 200 million years ago, the mega-landmass PANGAEA started splitting into two large landmasses namely, LAURASIA in the north and GONDWANALAND in the south. These two landmasses kept splitting till they they reached present configuration of continents and oceans.

The argument for the Continental Drift Theory gets strength from the following evidences:

According to Wegener, forces responsible for this Continental drifting are:

Tectonic plate/ lithospheric plate is a massive , irregularly shaped slab of solid rock , generally composed of continental and oceanic lithosphere. Plates move horizontally over the aesthenosphere as rigid units. these can be called oceanic or continental based on which area is major on the plate. Theory of plate tectonics proposes that – Earth lithosphere is divided into seven major and some minor plates.

These plates have been constantly moving over globe throughout the history of earth. Continents are part of a plate and what moves is the plate. This is in not sync with what Wegener said, he said continents move.

Position of peninsular India is traced from rocks found in Nagpur area.

There are three type of plate boundaries : 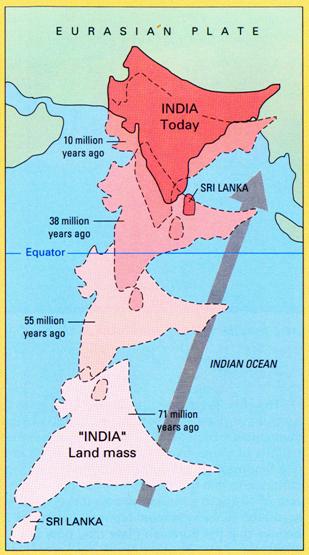 Rates of plate movements determined by the strips of normal and reverse magnetic field that parallels the mid-oceanic ridges.

The slow movement of hot, softened mantle that lies below the rigid plates is the driving force behind the plate movement.