India has three main geological regions, the Himalayas (Extra-peninsular region), the Indo-Gangetic Plain, the Peneinsula. The Himalayas are further classified under the following divisions from, west to east, into four regions:

Since Himalayas are a young fold mountain system, they have an unstable terrain. Furthermore, human activiities and indiscriminate construction activities have triggered and highlighted various hazards in the Himalaysn Ecosystem. These are :- earthquakes, landslides,avalanches, flash floods, forest fires, and soil erosion.

There are certain regions which are more prone to a typical type of disaster according to the altitude. Let us consider the typical examples.

An avalanche is defined as a flow of of snow downside of a mountain, though rock slides and debris flow are also sometimes called as avalanches. 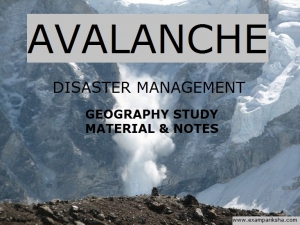 There have been instances of avalanches in the recent news, wherein, last year Nepali Sherpa died during an avalanche at Mt. Everest base camp, and more recently in north-eastern Afghanistan in Panjshir valley of Hindu-kush mountains.

The factors leading to Avalanche are described below:

A rapid downslope movement of snow, rocks and debris is known as Avalanche. Generally, a large avalanche has a speed of upto 200 kmph, which results in massive destruction of forests, highways, houses and power lines. All avalanches are caused by over burden of mass of snow. It generally occurs when the load of upper layers of snow exceeds the bonding forces of a mass of snow.

Whenever the gravitational force exceeds the mechanical strength of the snow cover, an avalanche occurs. This proces of avalanche is triggered by either- natural and artificial factors.

The slope of flatter than 25 degrees is not conductive for a avalanche like situation. Also slopes steeper than 60 degrees are also not prone to avalanches because they don’t hold significant amount of snow.

Human triggered avalanche mainly occur on slopes of inclination between 35 to 45 degrees. Also convex slopes are more dangerous than concave ones. This is because there is a disparity between the tensile strength of snow layers and their compressive strength on convex slope.