We know that a cheque is negotiable instrument. Any informed individual will be aware that during the process of circulation, a cheque might get stolen, lost or may even have forged signature of payee. This type of situation may result in wrong use of the cheque.

Therefore, crossing of the cheques is a popular device for protecting the drawer and the payee. The bearer and order cheques both can be crossed. Hence, crossing of cheques prevents fraud and wrong payments 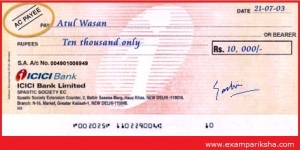 Any cheque can be crossed by crossed with two parallel lines. Crossing means drawing of two parallel transverselines across the cheque with or without the words in between those lines.

The crossing of cheque gives a direction to the drawee bank to not pay the mentioned amount at the counter, instead the payment should be done through a bank. This guards payment against forgery by any unscrupulous persons because a crossed cheque can only be deposited directly into a bank account and cannot be cashed immediately.

Importance of Crossing of Cheque:

The significance of crossing of a cheque is that a crossed cheque cannot be encashed by the bearer but can only be collected from the drawee bank in the bank account. (Sec. 123 and 126 of the Negotiable Instruments Act) Therefore, Crossing of cheque provides protection and safeguard to the issuer of the cheque. In case of a crossed cheque one can easily detect who encashed the said cheque, unlike the case of non-crossed cheque. Hence, Crossing protects both payer and the payee of the cheque. Also, both bearer and order cheques can be crossed.

Rules of Crossing of Cheque

Negotiable Cheques are generally crossed as a measure of safety.

Section 123 of the Negotiable Instruments Act has defined General Crossing – “where a cheque bears across its face an addition of the words ‘And Company’ or any abbreviation thereof, between two parallel transverse lines or of two parallel transverse lines simply, and either with or without the words ‘not negotiable’, that addition shall be deemed to be a crossing of cheque and the cheque shall be deemed to be crossed generally”.

General Crossing involves two parallel transverse lines across the face of the cheque with or without ‘not negotiable’ written on it. Such addition shall be considered to be a crossing.

To summaries, A cheque is considered to be generally crossed in the following cases:

Special And Restrictive Crossing of Cheque

A cheque is said to be specially crossed when a particular bank’s name is written in between the two transverse parallel lines on the cheque. 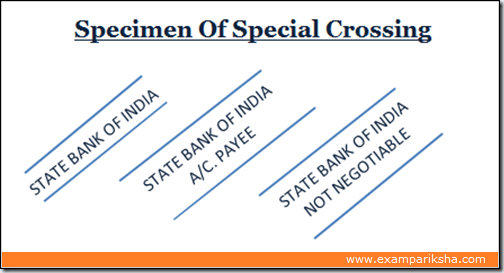 In a special crossed cheque, the amount written in cheque is payable by the drawee only, and only to the bank named in the crossing.

Not negotiable Crossing of Cheque