DBMS being a very important topic for IBPS IT Officer’s post exam, Questions are regularly asked under the “Professional Knowledge section” for IT Officers. Depending upon the questions asked in the previous exams of IBPS we have prepared a list of topics that are specifically important. We will be covering them under the Banking Study Material & Notes Section of our website. We encourage you to constantly visit our site and keep yourself updated in this topic to score good marks in the Professional Knowledge Section.

If you are new to this topic we recommend you to read the other articles for SQL, RDBMS, Data Concepts published on our website to get a fair idea of this topic.

Not only the study material and Notes but also the tips and tricks are constantly being given on our website and our social media pages at Facebook, Twitter and Google+.  Subscribing and getting in touch with us will help you to stay up-to-date on all the major topics for not only IBPS IT but also for other Competition Exams.

If you have any topic or subject that you want us to cover, do inform us in the comments or through the contact us page. 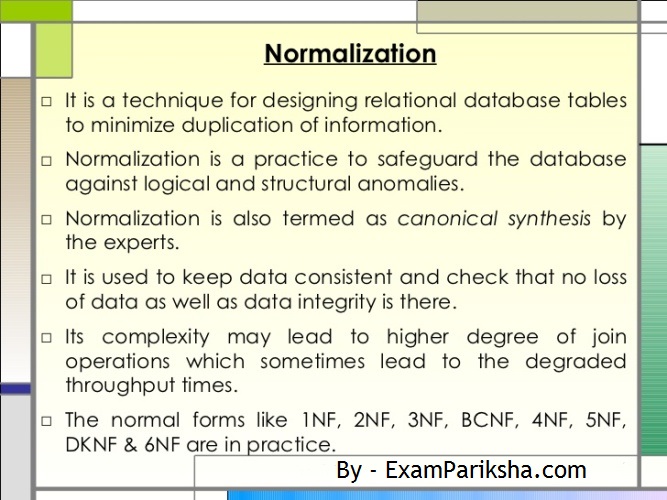 First Normal Form(1NF) handles the ‘shape’ of the record type. A relation is in 1NF if, and only if, it contains no repeating attributes or groups of attributes.

To remove the repeating group, either flatten the table and extend the key, or decompose the relation-leading to First Normal Form.

The Student table with the repeating group can be written as:

If the repeating group was flattened, as in the Student #2 data table, it will look something similar to:

We’ve now solved the repeating groups problem, however we have created other complications. Every repetition of the matric_no, name, and data_of_birth is redundant and liable to produce errors.

With the relation in its flattened form, strange anomalies appear in the system. Redundant data is the primary reason behind insertion, deletion, and updating anomalies.

With the primary key including subject, we cannot enter a new student until they have at least one subject to study. We are not allowed NULLs in the primary key so we must have an entry in both matric_no and subject before we can create a new record. This is called the insertion anomaly.

If the name of a student were changed for example Smith, J. was changed to Green, J. this would require not one change but many one for every subject that Smith, J. studied.

A relation is in 2NF if, and only if, it is in 1NF and every non-key attribute is fully functionally dependent on the whole key. Thus the relation is in 1NF with no repeating groups, and all non-key attributes must depend on the whole key, not just some part of it. A different way of saying this is that there must be no partial key dependencies (PKDs).

By definition transitive functional dependency can only occur in cases where there is more than one non-key field, so we can say that a relation in 2NF with Zero or one non-key field must automatically be in 3NF.

Boyce and Codd Normal Form is a higher version of the Third Normal Form. This form deals with certain type of anamoly that is not handled by 3NF. A 3NF table which does not have multiple overlapping candidate keys is said to be in BCNF.