There were Muslim invasions into India resulted in the established from AD 1206 to 1526. There were five dynasties in the Delhi Sultanate, The Slave dynasty, Khalji, Tuglaq, Sayyids and Lodis.

The Slave dynasty was also known as Mamluk dynasty. They were turkish in origin. Qutub-ud-din-Aibak established the slave dynasty. He was a slave of Mohammad Ghori. Other important rulers of this dynasty were:

Iltutmish was a slave of Aibak. He belonged to Ilbari tribe. Iltutmish is credited for shifting the capital of his empire to Delhi from Lahore. Iltutmish saved India from Mongol wrath of Chengiz Khan . Iltutmish issued silver Tanka, introducing arabic coinage in India. Various sufi saint Minhaj-us-Siraj, Taj-ud-din, Nizam-ul-mulk, Fakhrul-Mulk Isami. Iltutmish completed the construction of Qutb Minar at Delhi.

Raziya was nominated by Iltutmish as his successor. She was the first and only Muslim lady who ever ruled India. In 1240 AD, Razia was defeated and killed.

The Khilji dynasty was founded of Jalauddin Khilji.

He killed his father-in-law to usurp the throne. He was the first Turkish Sultan of Delhi who separated religion from the State. He ordered the measurement of land. He established four separate markets in Delhi. There were separate department called Diwani Riyasat was created under an officer known as Naib-i-Riyasat. There were secret agents called munhiyans. He seized Chittor in Rajasthan. His greatest achievement was conquest of Deccan. He patronized poets like Amir Khusrau and Amir Hasan. He built Alai Darwaza and constructed a new capital at Siri.

Ghiyassudin Tuglaq was the founder of Tugalaq dynasty. He killed Khusrau Khan, the last king of Khilji dynasty.

He is considered to be ahead of his time. He had relations with China, Egypt, Iran. He was the only Delhi Sultan who had received a comprehensive literary, religious and philosophical education.. Mohhamad-bin-Tuglaq shifted the capital from Delhi to Daulatabad. But then again shifted the capital back to Delhi after two years. He introduced copper based token currency, for the first time in India. But he was not able to prevent forging of the coins and the experiment had to be abandoned.He began the scheme of giving loans to farmers for cultivation known as takkavi loans.

Under his reign, Jaziya became a separate tax and was strictly imposed on non-muslims. He built Firozabad near Red Fort, popularly known as Firoz Shah Kota. He established a new department called Diwan-ikhairat to take care of widows and orphans. Firoz Shah was intolerant towards Shia muslims and Sufis.

After Firoz Shah: The Delhi Sultanate disintegrated. The final blow to the Tughlaq dynasty was by invasion of Timur in 1398. Timur sacked and plundered Delhi before returning back to Central Asia. Timur was a turk who left his nominee to rule.

Timur’s nominee was Khizr Khan, who was the governor of Multan. He captured Delhi and tried to rule. After him, Mubarak Shah, Muhammad Shah ruled for a little while. The last Sayyid ruler descended the throne in favour of Bahlol Lodi. 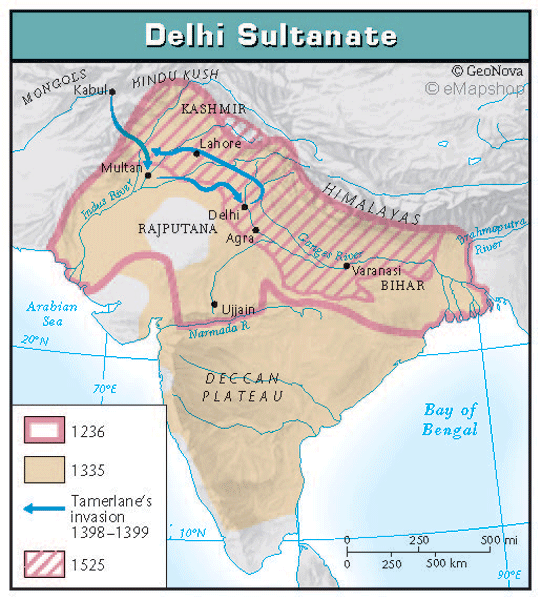 The Lodis were Afghans, Bahlol Lodi founded the Lodhi dynasty. He was succeeded by Sikandar Lodhi.

Sikandar Lodhi was the greatest of the three Lodi sovereigns. He conquered Bihar, while also defeating many Rajput chiefs. He was a good administrator. He shifted the capital from Delhi to Agra. He was a bigot who destroyed many hindu temples.

Ibrahim Lodi succeeded Sikandar Lodi. He was defeated by the Afghan Mughal Babur in the 1st Battle of Panipat in 1526. He was the last king of Delhi sultanate.

<< Read about Movements of Oceans here>>