Questions regarding Fundamental rights feature as a fixture in all General Awareness papers, especially UPSC exams like SSC, IAS, civil services, etc. these are also a staple in all the state PSC conducted exams. Here we are providing a brief material for quick revision as well as reference for benefit of fellow aspirants. These points will serve well for the Essay papers also. 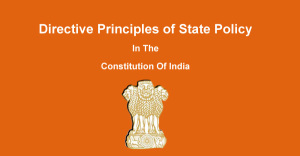 Directive Principles of State Policy are  instructions/guidelines to the governments at the center as well as states. Though these principles are non-justiciable, they are fundamental in the governance of the country.

The idea of Directive Principles of State Policy has been taken from the Irish Constitution.

They were incorporated in our Constitution in order to provide economic justice and to avoid concentration of wealth in the hands of a few people. Therefore, no government can afford to ignore these. They are, the directives to the future governments to incorporate the ideals in the decisions and policies to be formulated by them.These principles give directions to the state for making laws and policies for the collective good of the people.

These Principles are non justiciable and are not enforceable by the Courts of law. But they are still considered fundamental to the governance of country.
They are classified into four categories –

DPSPs put stress on universalization of education, abolition of child labour and improvement of the status of women. They give a framework for establishing welfare state and achieving economic and social democracy.

1. The economic and social Principles:

The state should strive to achieve Socio-economic welfare of the people by:

These are certain principles, based on the ideals advocated by Mahatma Gandhi. These Principles are as follows : –

India should give active cooperation towards world peace and security.To achieve that, the state should endeavour for : –

The Directive Principles put under this call upon the state : –

Critics call these Directive Principles of State Policy as not better than‘New Year Greetings’ due to their irrationale, high sounding promises. It has been asserted that these Directives are in the form of holy wishes having no legal sanction behind them. No government is bound to implement them.

Critics also point out that they are not formulated keeping the practical aspect these ideals in mind.

In spite of the above stated criticism, it is widely agreed that -They have their own utility and significance.

These Directive Principles are  like a polestar that provide direction. Their basic aim is to persuade the government to provide social and economic justice in all spheres of life, given the limited material resources available in the country, at the earliest possible. Many of them have also been implemented successfully.
Political cost: In reality, no government can afford to ignore these instructions as these are a reflection of the public opinion and also mirror the basic spirit of the Preamble of our Constitution.

Some of the steps taken by successive governments in this direction are summerised below:

These indicate that many Directive Principles of State Policy have been implemented to lay down the foundations of a secular, socialist and welfare state.

Even with these achievements, there is a long way to go towards total fulfillment. There are many roadblocks in full implementation of Directive Principles of State Policies:

Inspite of the above differences, there is a close relationship between the two. Fundamental Rights and Directive Principles are complementary and supplementary to each other.