After Harshavardhan, new kingdoms and dynasties emerged. They were big landlords or warrior chiefs who emerged close to 7th century. The Kings acknowledged them as Samanthas, and received gift from these samanthas, who provided the militray support to the kings in need.

They often declared themselves as ‘maha-samanthas’ and ‘maha-mahadaleshvara’. For instance, the Rashtrakutas in Deccan, who were initially they were subordinate to Chalukyas of Karnataka. In mid 8th century they gained control over the land.

There were Brahmin rulers like the Kadamba Mayurasharman in Karnataka and Gurjara-Pratihara Harichandara in Rajasthan.

“Tripartite Struggle” between the Rashtrakutas, Palas and Gurjara- Pratihara fought to control Kanauj, towards the end of 8th century AD. This struggle for supremacy among the Palas, Partihars and rashtrakutas was significant event in these centuries.

Genrally, the period between 750 AD and 1200 AD is referred to as the Rajput Period. This period has been characterised by a lack of unity in the kingdoms amid foreign invasions.

The Palas of Bengal during Early Medieval Period in India:

The Pala dynasty was founded by Gopala in 750 AD. He was succeeded by his son Dharmapala who revived Nalanda University. He also founded the Vikramsila University(present day Bhagalpur district in Bihar).

He was succeeded by Devapal during 815-855 AD. He built the famous the Mahabodhi temple at Bodh Gaya. The Palas patronised Buddhism even while it was on decline in other parts of India. They were the followers of Mahayana and Vajrayana schools of Buddhism. Proto-Bengali literature and art flourished during their rule. The UNESCO world Heritage site, Somapura Mahavihara(now in Bangladesh) was constructed during the Pala reign. They ruled over parts of modern day Bengal and Bihar.

The Palas were succeeded by Sena dynasty of Bengal. In the court of Lakshman Sena the author of Gita Govind, Jayadeva was the court poet.

The Pratiharas of Kannauj During Early Medieval History of India:

Also known as Gurjara Pratihara because they probably originated from Gujarat region. Mihir Bhoja was the most important ruler of this dynasty. Kannauj became their capital for a while. They are believed to be a clan of Rajputs. Nagabhatta was the first great ruler of this dynasty. He ruled from about 725 Ad to 740 AD. He defeated the Arab Muslim rulers of Sind and prevented them from capturing the central India. He was succeeded by Devaraja, Vatsaraja and Nagabhata II. At its peak, the Gurjara-Pratihara empire included parts of eastern Punjab, awadh, Agra, gwalior, and Rajasthan.

Mihir Bhoja ruled from 840-890 AD, he took the empire to its peak glory by extending the boundaries of empire further. He made Kannauj an important centre in India. Mihir Bhoja maintained large army. He was a patron of art and learning. Himself a vaishnavite, he was tolerant to other religions.

The Rashtrakutas in Early Medieval Period in India:

Dantiduga was the founder of the Rashtrakuta dynasty with his capital at Malkhand or Malkhed, in present day gulbarga district in Karataka. The Rashtrakutas built the famous Kailasa Temple at ellora which is remarkable rock-cut architecture.

Other important Rulers of the time:

The Solankis of Gujarat in Early Medieval Period in India:

Initially, they were feaudatopries of the Pratiharas, later around 10th century, they asserted their independence under their chief, Mularaja. The Solanki capital was Anhilwara. Another significant ruler of this dynasty was Bhima. He witness the Gujarat invasion led by Mahmud of Ghazni.

The greatest ruler of the Solanki dynasty was Kumarpala, after whose death, the kingdom declined.

The Sisodias of Mewar in Early Medieval Indian History:

Bappa Rawal was the founder of the Sisodia kingdom. He set up Chittor as his capital. Mewar reached the height of its power under the rule of Rana Kumbha and his grandson, Rana Sanga. Rana Kumbha had defeated the Muslim ruler of Malwa and built Vijay Stambh to commorate the victory in Chittor. 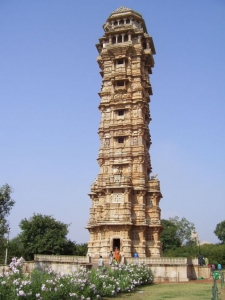 Kumbha was a great warrior, musician, poet and a builder. His successor Maharana Pratap fought many battles against Muslim rulers and did not submit to them.

<< Read the powers of President of India>>

<< Learn about Countries, their currencies and capitals here >>