The study of seismic activity gives valuable information about the interior structure of the Earth. Earthquake is a natural event and involves shaking of the ground. A thorough study and observations of this phenomenon has helped in understanding of innermost parts where this occurs . An Earthquake is the shaking or vibration/tremors in the Crust, caused as a result of internal forces and vulcanism in the Earth.

All earthquakes are different in their intensity and magnitude. The instrument for measurement of the vibrations is known as Seismograph. 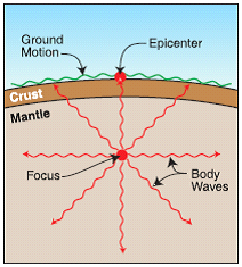 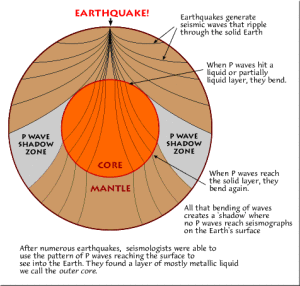 These waves occur in lithosphere, i.e. up to 200 km of depth from the surface of Earth.
These waves are recorded on a seismograph. It shows different types of waves.
There are two type of waves: A) Body waves; B) Surface waves.

Let us look into the characteristics of each of these waves in brief. The following are points from standard textbook so they are reliable source for study and revision: