Home/Study Material/History/East India Company Rule in India – History Study Material & Notes
East India Company Rule in India – History Study Material & Notes
The British East India Company, which is also referred to as “John Company”, was formed as a Joint- Stock Company that was established as The Company of Merchants of London Trading into the East Indies, in 1600. That was the time when other trading companies, that were established by the Portuguese, Dutch, French, and Danish were active in the region.
British Company began functioning in India in year 1612 after they were  granted the rights to establish a factory in Surat. Sir Thomas Roe who was a representative diplomat of Queen Elizabeth 1st of England went to the court of Mughal emperor Jahangir to seek permission.
Thereafter the formal British rule in India commenced in 1757, after Battle of Plassey, when the Nawab of Bengal surrendered his dominion to the British East India Company.
Methods followed by British to expand their empire: 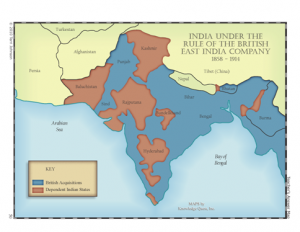 Let us study the expansion of British Company rule in India:

The beginning of British political control influence is traced to the battle of Plassey in 1757. In the Battle English East India Company defeated Siraj-ud-Daulah who was the Nawab of Bengal. Bengal was very fertile and was considered the most richest provinces of India. Therefore, company rule was desirable to secure their trading interests in the province. The company secured valuable privileges under the royal farman by Mughal Emperor in 1717. The farman granted export and import  freedom to British goods in Bengal  without paying taxes and the right to issue passes or ‘Dastaks’ for movement of such goods. The company servants were also allowed to trade but not under the farman.

Events leading to establishment of company rule in Bengal:

In Bengal, Murshil Quli Khan(1717-27) : He was appointed as Subedar in Bengal by Mughal emperor Farrukh Siyar. He transferred the capital from Dhaka to Murshidabad.

Alivardi Khan (1740-1756) : He legalised his reception of farman from Mughal emperor Muhammad Shah ‘Rangeela’ after paying him two crore rupees. He had prevented the English and the French from fortifying factories at Calcutta and Chandranagore. Alivardi Khan was succeeded by his grandson Sirajuddaula.

He seized the English factory at Kasimbazar. On 20th June in 1756, Fort William surrendered but Robert Clive managed to recover Calcutta.

Treaty of Alinagar: was signed on 2nd Jan 1757, in which Siraj conceded his demands and British managed to capture Chandranagore which was occupied by French till now.

Importance of Battle of Plassey:
The battle of Plassey has immense historical importance because it allowed for the conquest of whole Bengal and thereafter the whole of India.
It boosted the morale of the English company and gave them rich revenues helped them to organise a strong army for defence.

Mir Jafar (1757-60) became the Nawab of Bengal while giving 24 parganas to the company to collect revenues and free trade in Bengal.

Mir Qasim(1760-64) moved the capital from Murshidabad to Munger. He also ceded Burdwan, Midnapore and Chittagong. Mir Qasim forrmed with Awadh ruler Shujauddaula and Mughal emperor Shah Alam II. He was was angry with the British for misusing the dastak(free duty pass).

Battle of Buxar (1764) : Mir Qasim, Shujauddala and Shah Alam II were defeated by forces of Munro. It was the most decisive battle in Indian history and it established the British firmly in Bengal, Bihar and Orissa. This win ensured British supremacy in Northern India where now they were rivals for the Afghans and the Marathas.

Mir Jafar was again placed on the throne. Upon his death, Nizamuddaula, his son was placed on the throne and signed traety with British to disband their army and to administer Bengal through a Deputy Subedar nominated by the Company.
Robert Clive concluded two separate treaties of Allahabad with Shah Alam II and Shujauddaula.

In 1765, dual Government began in Bengal. The company rule had Diwani and Nizamat rights from Nizamuddaula, Nawab of Bengal. But company did not take over direct administration and revenue collection in Bengal. In 1772, Warren Hastings ended this dual system of government.

<<Read about list of countries and their capitals here>>