‘Fundamental Rights’ are recognised to ensure physical, mental and moral development of every citizen. Fundamental Rights provide standards of conduct, citizenship, justice and fair play .Fundamental Rights generate a feeling of security amongst the minorities in the country.They establish framework of ‘democratic legitimacy’ for the rule of the majority. In our Constitution, Fundamental Rights are enumerated in Part III from Article 14 to 32.

Fundamental Rights which are enjoyed by both i.e. citizens as well as foreigners: 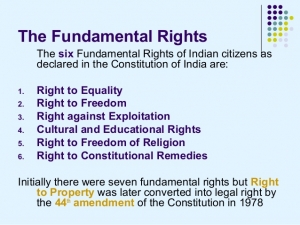 Right to Equality means that all citizens enjoy equal privileges and opportunities. It protects the citizens against any discrimination by the State on the basis of religion, caste, race, sex, or place of birth. Right to Equality includes five types of equalities:

To recognise execellent service by individual citizens to the country or mankind, the President of India can confer civil and military awards on those individuals such as : Bharat Ratna ; Padma Vibhushan, ;Padam Sri, ;Param Veer Chakra, ;Veer Chakra etc., but these cannot be used on ‘titles’.

A)  Freedom is the basic characteristic of a true democracy. Hence, Our Constitution in Article 19 guarantees the following six Fundamental Freedoms against state action and not private individuals:

These freedom ensures free speech, discussion and exchange of opinions, including freedom of the press. However these freedom are not absolute. The state can impose reasonable restrictions on the exercise of these freedoms, they can be suspended during National Emergency.

B) Protection in Respect of Conviction for Offences :  The article 20 ,assures protection against arbitrary arrest and excessive punishment to any person who is alleged to have committed an offence. No person shall be punished except for the violation of law which is in force when the crime was committed. An accused cannot be compelled to be a witness against himself/herself. No person shall be punished for the same offence more than once.

C) Protection of Life and Personal Liberty:  Article 21 assures , no person shall be deprived of his/her life or personal liberty except according to the procedure established by law. It guarantees that life or personal liberty shall not be taken away without the sanction of law. It ensures that no person can be punished or imprisoned merely at the whims of some authority. He/she may be punished only for the violation of the law.

D)Right to Education: This is recently added by the 86th Amendment , and a new article 21-A has been added. “The State shall provide free and compulsory education to all children of the age of six to fourteen in such a manner as the State may by law determine”. It also states that it is the responsibility of the parent or guardian to provide opportunities for education to their child or ward between the age of six to fourteen years.

E) Prevention against Arbitrary Arrest and Detention: Article 22 gives certain rights to the arrested person. No person can be arrested or detained in custody without being informed of the grounds for detention. He /she has the right to consult and be defended by a lawyer of his/her choice. The accused has to be produced before the nearest magistrate within a period of twenty-four hours of arrest. But, these safeguards however are not available to foreigners as well as to those citizens detained under Preventive Detention Act.

The Constitution guarantees to every person freedom of conscience and the right to practice and propagate any religion.  It also permits every religious group, the right to manage its own affairs in matters of religion. Constitution lays down that no religious education can be imparted in any educational institution which is wholly maintained out of the state funds. Right to Freedom of Religion is not absolute and can be restricted on the grounds of public order, morality and health. But,the state shall not impose restrictions arbitrarily .

Our constitution, under article 29 and 30, provides guarantees to preserve maintain and promote culture and language of its citizens. The Constitution allows minorities to establish and maintains educational institutions of their own. It also provides that the state shall not discriminate against any educational institution while granting financial aid on the grounds that it is being run by a minority community. These rights ensure that minorities will get assistance by the state in the preservation of their language and culture.

Article 32 of our Constitution provides for legal remedies for the protection of all these rights against their violation by the State or other  institutions or individuals. It entitles the citizens of India to move the Supreme Court or High Courts for the enforcement of these rights. Any law that may be in conflict with the Fundamentals Rights stands null and void. The Constitution empowers the Supreme Court and High Courts to issue orders or writs like HABEAS CORPUS , MANDAMUS, PROHIBITION, QUO WARRANTO, CERTIORARI. These writs play an importantt role in protecting the rights of the individuals against encroachment by the legislature, the executive or any other authority.