A Depository Receipt is a type of negotiable or transferable financial security, which represents a security, generally  in the form of equity, that is issued by any foreign publicly-listed company. Regardless, Depository Receipts are traded in a local stock exchange even though the foreign public-listed company is not traded on the local exchange.

Therefore, the Depository Receipts are physical certificates, which allow the investors to hold shares in equities of other countries. Such type of investment instruments first started in USA in the late 1920s , where they were popularly known as American depository receipt (ADRs). Along the course of time, these have become popular in other parts of world also. These are known as Global Depository Receipts (GDRs). Other similar type of DRs are- European DRs.

What is a Global Depository Receipt (GDR) ?

A Global Depository Receipt is a bank certificate that is basically issued in more than one country for shares in a foreign company. These shares are held by a foreign branch of an international bank. These shares trade like domestic shares, but these are offered for sale globally through various branches of the banks.

In India, GDRs are a popular financial instrument used by listed companies, as also in many other economies, mainly to raise funds denominated generally in the US dollar or the Euros. Since, GDRs are typically bank 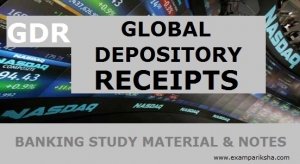 certificates held by a foreign branch of an international bank, they are tradable and transferable. While the shares trade on a domestic stock exchange, they can also be offered for sale globally through the enlisted branches of the bank .

GDRs are used as a financial instrument by private markets to raise capital.

<<Click here to read about role and functions of SEBI>>

How GDRs are used for routing Black money and Tax Evasion:

There have been associations made between GDRs and Black money in recent times by regulatory authorities and hence, it is seen in media also. Below is brief about Black money to facilitate the understanding of the topic.

Black Money: Round tripping of funds has been assigned as a major route for laundering black money. It basically involves an entity that is transferring an asset or funds, on the pretext of a business deal, with an agreement to buy it back.  This type of practices also involve inflated business transactions without making any real profit.