The Objectives of Government Budget in India:

In a mixed economy like ours, the government plays a significant role along with the private sector. The three major functions served by this presentation of estimates.

[box type=”shadow” align=”aligncenter” ]Public provision – financed through budget and made available free of any direct payment. Such goods can be directly produced by government or by private sector.[/box]

Components of Government Budgeting in India

Constitution mandates presentation of a statement of estimated receipts and expenditures of government in financial year from 1 April to 31 March before the Parliament, under Article 112. 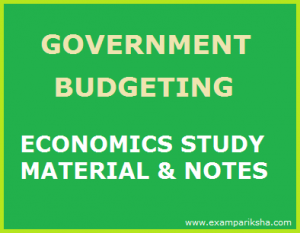 The Annual Financial Statement is the Budget is divided into Revenue and Capital.

Revenue Budget of Government of India:

The current receipts of government are included in the revenue budget. Estimated expenditure from these.

[box type=”shadow” align=”aligncenter” ]Revenue receipts take into account effect of tax proposals in Finance Bill as well. Finance Bill – provides details of imposition, abolition, alteration, remission, or regulation of taxes proposed in Budget. It is presented along the Budget.[/box]

Non-reedemable, i.e., can’t be reclaimed from the government). The revenue receipts are divided into Tax revenue and Non-tax revenue.

Tax Revenue: proceeds of taxes and duties levied by central government. It is divided into direct taxes and Indirect taxes.

Non Tax Revenue: interest receipts on loans given by central government, dividends or profits in investment of government, fees & other receipts for services rendered by government. Also, cash grants-in-aid received from foreign countries and international organisations.

Expense other than creation of physical or financial assets of central government, which means expenditure for normal functioning of government departments(day to day working)

Plan revenue expenditure: It is related to central plan(FYP) and central assistance to states and UTs Plans.

Capital Budget of Government of India:

Assets and liabilities of central government. Changes occurring capital is considered, shows capital requirements of government and pattern of their financing.

Receipts creating liabilities, and reducing financial assets. These are:

Expense which result in creation of physical or financial asset. Reduction in financial liabilities. They are:

Related to central plan, central assistance to States and UTs.

Other documents under the FRBM Act

Along with Budget, there are three other Policy Statements mandated by FRBM Act(Financial Responsibility & Budget Management).