It is given fact that the radius of earth is 6,370 km. Therefore, the interior of Earth can not be studied only by direct observations. But its properties are studied indirectly by deducing conclusions from the study of earthquake waves that propagate through the interior rocks and other such indirect means.

Sources of study of interior of earth: 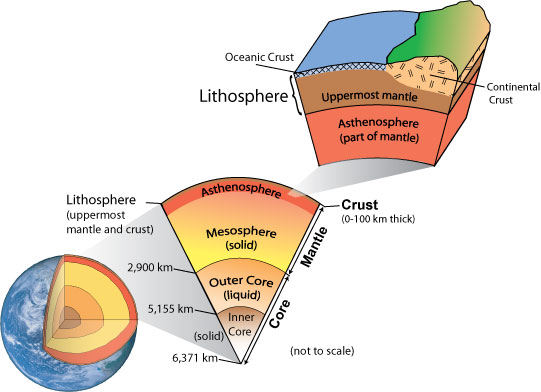 It is the outermost solid and brittle part of the Earth.

Himalayan crust is 70 km thick since the continental crust is usually thicker in mountaineous areas.

The portion of interior of crust is called mantle. It extends from Moho’s discontinuity to 2,900 km. The upper part of mantle is called – Asthenoshpere. “Asthen” means weak. It extends upto 400 km and it is the main source of magma.

Lithosphere is the crust and uppermost solid part of the mantle. It has thickness in range of 10-200km. The lower mantle extends beyond aesthenosphere and remains in the solid state. It should be noted here that the mantle has higher density than the crust.

Geological time scale is a system of chronological measurement of time, and it is usually referred by Earth scientists to describe the timing and the relationships between events that have occurred throughout Earth’s history since its inception. There are few specific words used in this time scale which should be explained for better understanding of the time scale.