The Parliament is basically Legislature, i.e., a law making body. Therefore ,any proposed law is introduced in the Parliament as a Bill. After the bill is passed by the Parliament and receives the Presidential assent, it becomes a law.

There are two kinds of bills in the Parliament:-

Each member of the Parliament can introduce an ordinary bill under Article 107. Ordinary bills are those bills for whose passage, simple majority of the house is required. There are two types of ordinary bills, namely – Government bills and Private member’s bills.

The procedure of lawmaking in Parliament of India:

A bill is drafted and then introduced in the house for discussion before it becomes a law. Following steps are taken in the course: 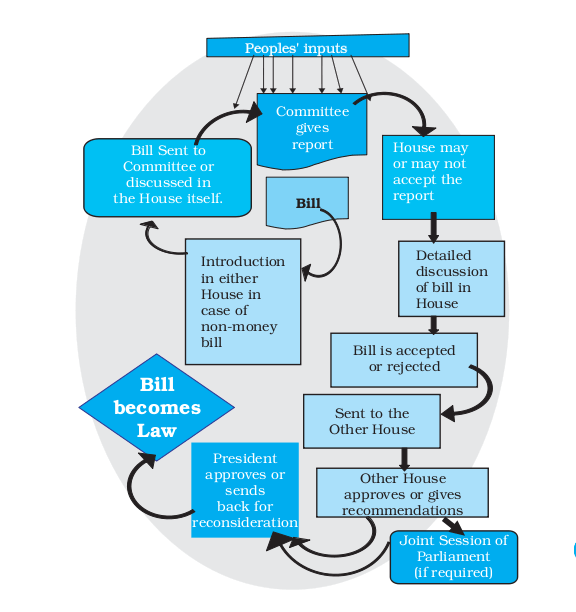 The legislative procedure begins with the introduction of the bill in either houses of Parliament. It can be introduced by either a minister or a private member, as explained above. The presiding officer of the house is informed first. The officer puts the question of introduction of bill before the house, if approved(generally by voice vote), the person introduces the bill. This is the first reading.

After the bill is introduction, it is published in the official gazette.

Stage 3: Reference to the Standing Committee

The presiding officer can refer the bill to the concerned standing committee for thorough study and examination of general principles and clauses of the bill. After consideration, the committee submits a report on the bill to the house. This report serves as reliable advice by the house.

This is a very crucial stage. A general discussion takes place over the bill in the house. There it can be referred to a select or joint committee for a clause by clause consideration along with expert opinion. Alternatively, the house can consider the bill clause by clause as introduced or reported by the select or joint committee. Here discussions take place. Putting this procedure in a quick revision pattern, please go through the following bullet points; After general discussion, the house can –

After the completion of the second reading, the member-in-charge can move that the bill be passed. At this stage any discussion is confined to arguments regarding passage or no passage of the bill. Then voting happens and fate of the bill is decided.

Stage 6: Bill is sent in the other House

After being passed by one house , the bill is sent to the other house for consideration. In the second house also, the bill goes through first reading, second reading and third reading. There are four actions that might be taken up the other house:

Stage 7: President’s assent to the Bill

Every bill is presented to the President for his approval after being passed by both the houses of Parliament for his assent. The President can take up any of the three alternative action over the bill.