After invasion by Alexander, the North western region in India faced various foreign attacks which caused unrest in these Indian States. Whereas, the Nandas who were ruling at that time were not popular due their severe taxation regimes imposed on agricultural by Dhanananda. The conditions like these gave opportunities to other authorities to take over the rule.

It was one of the greatest empires recorded in India history. The rule of Mauryas lasted from 322 – 185 B.C. where majority of India was united as a single state by the great founder emperor Chandragupta Maurya. With the help of Kautilya or Chanakya, Chandragupta Maurya laid the foundation of this vast empire.

After Chandragupta, his son Bindusara further extended the kingdom over entire sub-continent almost. It should be noted that the Mauryan Empire had the most powerful military in ancient India. After bindusara, came the greatest emporer of the Maurya dynasty, Ashoka. He was a skillful warrior and an able administrator. After the Kalinga war,  Ashoka became a follower of Buddhism and caused its spread across the Indian sub-continent by sending missionaries.

We will describe the details of rulers of the Mauryan Dynasty in another post, first let us look into another important topic about the Maurya Empire, their administration.

Questions regarding the administration regime followed in the Mauryan empire, have been asked in various descriptive exams like IAS mains exam, State PSC exams, etc. The details about the administration under Mauryas are required to answer the MCQ type question about history. Let us look into the details now:

Chanakya or Kautilyas Arthashastra explains the kind the of administration system followed in the Maurya Empire. The book has 15 sub-parts which contain 180 chapters. This book provides the most important literary source for study of the Mauryan administration.

The Central Government in Mauryan Empire:

Kautilya’s ‘Arthashastra’ mentions about the Duties of Government Superintendents (Adyakshas). These Adhyakshas formed a secretariat, which was divided into several departments. These departments and their superintendents are mentioned below: 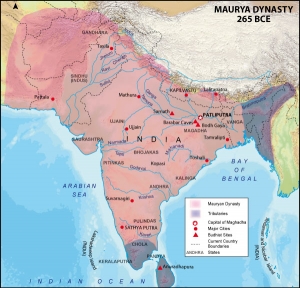