India has a monsoon kind of climate. The whole country has a tropical monsoonal climate since, the greater part of the country lies within tropics. And the climate is influenced by the south-west  and North-east monsoons.

The position of the mountain ranges and direction of the rain bearing winds are the two main factors that determine the climate of India. Alternating season is the chief characteristic feature of Indian Climate.

The climate is about the average weather conditions, which have been measured over many years.

The climate of India has broadly been described as monsoon type. Due to India’s location in the tropical region most of the rain is brought by monsoon winds.

India’s place called as Mawsynram in Meghalaya receives the world’s highest rainfall. While in a particular year it might not rain at all in Jaisalmer in Rajasthan.

Broadly, the major seasons recognized in India by the Indian Meteorological Department (IMD) are:

Traditionally, India has six seasons with each being two months long in duration. They are based on the astronomical division of 12 months into 6 parts. These seasons are reflected in the ancient Hindu calender. These are listed with their traditional names below:

Factors affecting the Climate of India

The Climate in India is affected by following factors

During the winter season, cool and dry winds blow from direction of North towards South.

During winter season, the Sun rays do not fall directly, they are slant, as a result, the temperatures are quite low in Northern India. 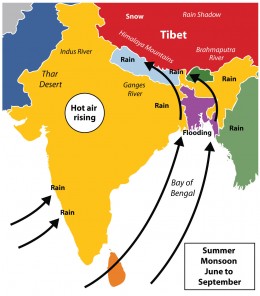 This season is marked by the onset and advance of monsoon. The winds blow from Arabian Sea and Bay of Bengal towards the land. They carry moisture with them. When these winds strike the mountain barriers rainfall occurs.

When winds move back from the mainland to the Bay of Bengal, this season is known by name of the retreating monsoons. The southern part of India, particularly Tamil Nadu and Andhra Pradesh receive rainfall in this season.

El-Nino and the Indian Monsoon

El Niño is a complex weather pattern resulting from variations in ocean temperatures in the Equatorial Pacific region along South America. The term El Niño refers to the large-scale ocean-atmosphere climate interaction linked to a periodic warming in sea surface temperatures across the central and east-central Equatorial Pacific.

The system involves oceanic and atmospheric phenomena with the appearance of warm currents off the coast of Peru in the eastern pacific and affects weather in many places including India. It is merely an extension of the warm equatorial current which gets replaced temporarily by cold Peruvian current or Humbolt Current.

This results in two things:

It is a complex weather system that appears once every three to seven years, bringing drought, floods and other weather extremes to different parts of the world.

<< Read about history of Rashtrakuta dynasty in India here>>