The most important feature of the post-Mauryan period was its growth of trade and commerce, both internally as  well as externally in the country. There were two major internal land routes in ancient India. First was known as ‘Uttarapatha‘ which connected northern and eastern parts of India with the northwestern fringes of the present day Pakistan and further beyond that. The second land route was known as ‘Dakshinapatha’ had connected the peninsular India with the western and northern parts of India.

The Dakshinapatha was the major route which connected the north and south India. It started from Kaushambi near Allahabad and running through Ujjaiyini (modern Ujjain) extended further up to Bhrigukaccha or Broach, an important port on western coast. The Dakshinapatha was further connected with Pratishthana (modern Paithan), the capital of the Satavahanas. As regards external trade routes, after the discovery of monsoons by Hippatus, who was a Greek navigator in 45 AD, more and more sea voyages were used for trading purposes. Important ports of India on the western coast were Bharukachchha Sopara,  Kalyana, and Muziris, from north to southern direction.

Ships from these ports had sailed to the Roman Empire through the Red Sea. Trade with southeast Asia was conducted through the sea. Prominent ports on the eastern coast of India were ‘Tamralipti’ in West Bengal, the Arikamedu in Tamil Nadu Coast. The Sea trade was also conducted between ‘Bharukachchha’ and the ports of Southeastern Asia. 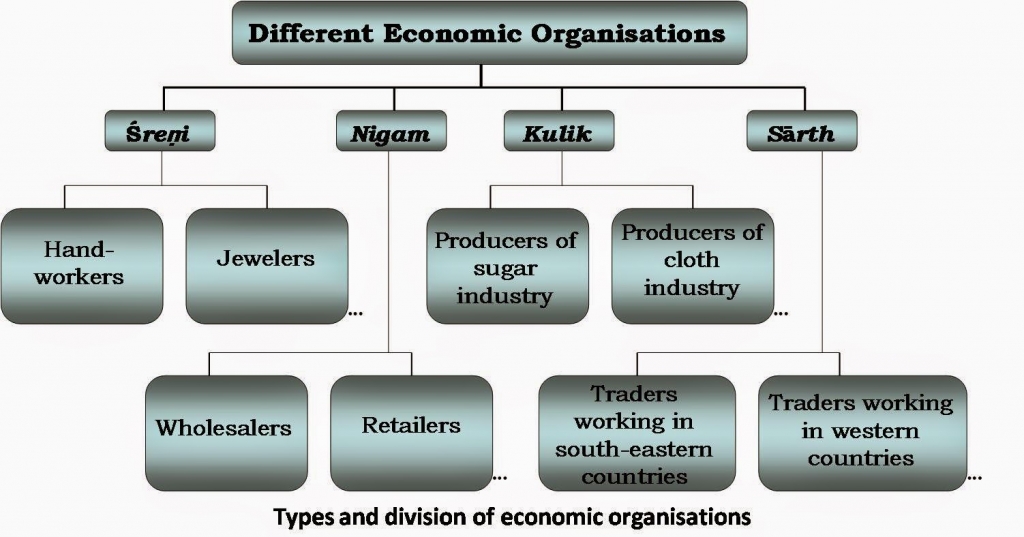 Establishment of trade between West and Central Asia:

An important feature of the commercial activities in the post-Mauryan period was the thriving trade between India and the West in the Roman empire was at its height. This trade in the beginning was carried out through land, but owing to frequent obstructions created by the Persians, those who ruled the areas through which these trade routes  passed, the focus was shifted to sea routes. Now the ships could move directly from Indian ports to the ports located on Red Sea and Persian Gulf. The best account of Indo-Roman trade is given in the book called ‘Periplus of the Erythrean Sea’ which was written in the first century AD by an anonymous author. Main requirements of these Romans were the Indian products such as spices, per- fumes, jewels, ivory and fine textiles, i.e. muslin. Spices were exported from India to the Roman empire included pepper, also called ‘yavanapriya’ because of its high popularity among the Romans.

The spice trade with Roman empire was based in the southern India.The Romans imported several types of precious and semiprecious stones like diamonds, carnelians, turquoise, agate, sapphires. They also imported pearls, indigo, sandal-wood and steel from India.

Against this import Romans exported gold and silver to India. It is proved by a large number of Roman coins of the first century AD found in the subcontinent. This indicates an enormous drain of gold from the Roman empire towards India. Other important items of export from the Roman empire included wine which is indicated by wine-
amphorae and sherds of Roman ware found in significant numbers at Arikamedu in south India. These western  traders also brought other things like tin, lead, slave girls and coral.

Crafts production had started growing in this period with tremendous impetus, as trade and commerce, both the internal and the foreign, were dependent greatly on the craft activities. The text work ‘Milindapanho’ has mentions of 75 types of occupations of which 60 were solely associated with crafts. The level of specialization in crafts was very high and there were separate distinct artisans working in materials like gold, silver, precious stones etc.

The city of Ujjain was a prominent bead making centre. Textile industry was another prominent industry. Mathura and Vanga (east Bengal) were very famous for variety of cotton and silk textiles. The discovery of ‘dying vats’ at various sites in southern India indicates that dying the clothes was a thriving craft in this area during the Post-mauryan period.

The artisans in this period reached new heights of prosperity and there are such numerous inscriptions which refer to the donations made by artisans to monasteries.

The communities of merchants that were organised in groups were known as ‘Shreni’ or guilds, under the head known as ‘sreshthi’.

Like the merchants roughly all craft vocations were also organised into the form of guilds, with each one under a headman called ‘Jyestha’. These included weavers,bamboo workers, corn dealers, oil manufacturers, potters and others etc. The guilds were basically associations of merchants and craftsmen following the same profession or dealing in the same commodity. They elected their head and framed their own rules regarding prices and quality etc., to regulate their business on the basis of mutual goodwill. They also served as bankers and received deposits from the public on a prescribed fixed rate of interest.

<< Read about list of countries and their capitals here