Indian constitution is unique in composition. Its salient features have already been discussed here.  The procedure of amendment makes the Constitution of India a curious mix of rigid and flexible. This gives flexibility  and adaptability to the constitution. Some provisions there can be easily modified and for other parts, special procedures are to be followed. 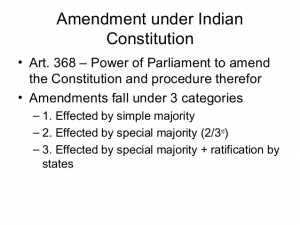 Highlights of Amendments of Indian Constitution

There are some peculiar aspects of the process of amendment that are worth your attention:

Article 368: The procedure of amendment of the constitution has been mentioned under Article 368 giving out two methods. One, by Special majority in each house of parliament and other by ratification of half of the states accompanied with special majority of the parliament.

Article 368 also states that Parliament has the right to exercise its constituent power to make “addition, variation or repeal any provision of the Constitution” as per the procedure.

To summarize the above there are three ways in all to amend the constitution:

Criticism of the amendment procedure: