The position of Adjectives:

As a general rule an adjective is placed immediately before the noun that it qualifies. This is known as Attributive use of adjectives. For example;

There are beautiful flowers in the garden.

Shyam is an intelligent boy.

When several adjectives qualify one noun, they can be placed after the noun which they qualify. An adjective can be used after the noun, when it is enlarged by some qualifying phrase or clause, such as;

She is a girl intelligent in all subjects.

In the above example above, it is not said that not ‘ an intelligent girl in all subjects.’

When an adjective is used Predicatively, it is used after its Noun or Pronoun and used along with the Verb and forms part of the Predicate. This is called Predicative use. Such as;

The flowers in the garden are beautiful.

In the above example, where the sentence has pronoun ‘beautiful’ is used after the verb ‘are’ as a part of predicate.

When an adjective is used predicatively, no articles(a, an, the) can be used before it. Such as;

She claims that she is an intelligent. (incorrect)

She claims that she is intelligent. (correct)

The adjective is correctly used with a verb when the quality of the subject, rather than the action of the verb, is to be expressed.

When several adjectives are used before a noun to qualify it, then these adjectives should be placed in such an order that the adjective showing / indicating the basic nature of the noun is placed as near as possible to its noun/pronoun. For instance;

I saw a young, beauutiful and well dressed woman. (incorrect)

I saw a well- dressed, beautiful and young woman. (correct)

The plural form of demonstrative adjectives ‘these’ & ‘thse’ shold not be used with the singular nouns ‘kind’ and ‘sort’. Such as;

These kind of things are found only in Delhi. (incorrect)

This kind of things is found only in Delhi. (correct) 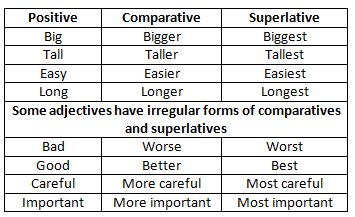 One must be careful not to form comparative or superlative degrees of adjectives for words that already express an extreme of comparison.

More rules and lessons regarding Adjectives will be updated on this page. Stay tuned to this page for more updates. Our readers are welcome to contribute to this page. We encourage engagement of our readers for benefit of all.

<< Read about powers of Prime Minister of India here>>