Drainage is the water flow through well defined channels. Drainage pattern is an outcome of geological time period, nature and structure of rocks, topography, slope, amount of water flowing and periodicity of the flow. The types of drainage patterns are:

Catchment Area: is that specific place or area from where river water is collected.

Drainage Basin: Area drained by a river and its tributaries, for large rivers, it is called a river basin.

Watershed: Small area separating one drainage basin from another, for small rivulets and rills, it is called watershed.

River basin and watersheds are marked by unity. What happens in one part affects another part or whole.

The rivers in India are classified on three different basis, let us look into each one of them.

I. On basis of discharge of water:

Through the Delhi Ridge, Aravalis and the Sahayadris, there is a separation of two systems of drainage in India:

II. Based on Size of Watershed:

There are three categories of rivers in India on the basis of the size of watershed.

III. Based on mode of origin, nature and Characteristics:

It is the most accepted classification, based on the origin, nature and characteristics, there are two types of drainage system with various rivers in India.

It is one of the largest river basins of world. Western-most of Himalayan rivers in India. Origin is from glaciar near Bokhar Chu in Tibet region in Kailash Mountain Range. The Indus river moves between Zaskar and Ladakh ranges, passes through Ladakh and Baltistan. It cuts Ladakh range, forming a gorge near Gilgit in Jammu and Kashmir.It enters Pakistan near Chillar in dardistan region.

In India, Indus only flows through Leh district.

Jhelum: Arises from spring at Verinag, at foot of Pir Panjal(SE Kashmir). It flows through Srinagar and Wular Lake. It then enters Pakistan through deep narrow gorge. It then joins Chenab near Jhang in Pakistan.

Chenab: It is largest tributary of Indus. Two streams Chandra and Bhaga join to form Chenab near Keylong in Himachal Pradesh.

Ravi: It origins near west of Rohtang pass and flows through Chambal valley from Kullu hills. It then drains area between South-eastern Pir Panjal and Dhauladhar ranges. Ravi then joins Chenab in Pakistan at Sarai Sindhu.

Beas: It origins near Beas kund near Rohtang pass. It passes through Kullu valley, gorges at Kati and Largi in Dhaoladhar range. It eners Punjab then, meets Satluj at Harike.

Satluj: It originates in Rakas lake near Mansarovar in Tibet, there it is called Langchen Khambab. Satluj flows parallel to Indus for 400 km, enters India at gorge in Rupar. through Shipki La it enters Punjab plains. It is a Bhakra Nangal project feeder. Satluj is an Antecendent river.

It originates Gangotri glaciar near Gaumukh in Uttarakashi in Uttarakhand. There it is called Bhagirathi.

Ganga enters the plains at Haridwar and moves in the direction of South then Southeast then East. Thereafter, it splits into Bhagirathi and the Hugli. Ganga discharges in Bay of Bengal near Sagar Island.

Yamuna: It is the longest and westernmost tributary. It originates from Yamunotri glaciaron Bunderpunch range. Joins Ganga at Prayag at Allahabad. Its own tributaries are Chambal, Sind, Betwa, Ken on right. Hindan, Rind, Sengar, Varuna from left bank.

Chambal: It originates at Mhow in Malwa plateau of MP. Flows through gorge to Kota (Gandhisagar dam) to Bundi, Sawai Madhopur, Dholpur and joins Yamuna. Chambal ravines are badland topography.

Ghaghara: It originates from Mapchachuno glaciar in transhimalayas and comes out from a deep gorge at Shishapani. At Chhapra it joins Ganga.

Kosi: It is an antecendent river which originates from North of Mt. Everest inTibet. Kosi joins Ganga at Bhagalpur.

Ramganga: It originates from Garhwal Hills and joins Ganga near Kannauj.

Damodar: It originates at Chotanagpur Plateau and flows through rift valley. Damodar joins Hugli. It is also known as “Sorrow of Bengal” earlier, now it is a boon to WB due to the Damodar Valley Corporation Multipurpose Project.

Son: It is a large south bank tributary which has its origin at Amarkantak plateau. Son joins Ganga at Arrah, west of Patna.

It originates at Chemayungdung glaciar in Kailash range near Mansarovar lake. It initially flows eastwards longitudinally as Tsangpo. Then it emerges as turbulant river, forms deep gorge at Namcha Barwa in Central Himalayas. Withg the name Dihang(Siang) it enters India at Sadiya town in Arunachal Pradesh and flows south to meet Dibang(Sikang) and Lohit to form Brahmaputra.

Brahmaputra enters Bangladesh near Dhubri and flows south. Thereafter Testa joins on its right bank and goes by the name Yamuna. and falls into Bay of Bengal after meeting Padma. 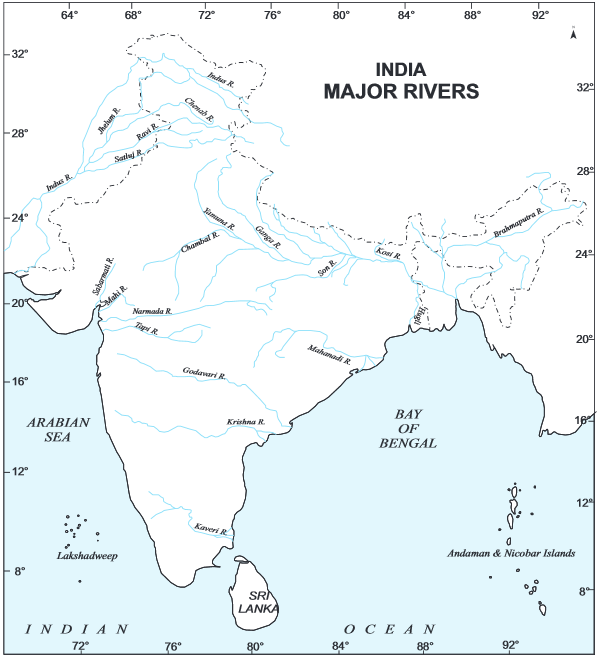 The Peninsular rivers of India are older than the Himalayan rivers. They are broad, largely graded shallow valleys and mature rivers and have a fixed course, absence of meanders, non-perennial water flow.

The water divide occurs at Western Ghats along western coast. Except Narmada and Tapi, most rivers flow from west to east into Bay of Bengal.

It originates in western flank of Amarkantak plateau and flows in rift valley between satpura in south and Vindhyan ranges in north. Narmada forms a gorge in marble rocks and Dhunadhar waterfall near Jabalpur. Sardar Sarovar Project has been built in Narmada. It meets Arabian Sea south of Bharuch forming a 27 km long estuary.

It originates at Multai in betul in Madhya Pradesh and drains Maharashtra, MP and Gujarat. Tapi flows in rift valley does not have much alluvial deposits.

It is ephemeral and largest in Rajasthan in west of Aravali. Luni originates near Pushkar in two branches of Saraswati and Sabarmati. Join each other at Govindgarh and from here it is called Luni and drains into Rann of Kuchchh.

It originates from Sihawa in Raipur, Chattisgarh through Orissa into Bay of Bengal. It covers MP, Chhattisgarh and Orissa.

It is a second largest east flowing peninsular river. Krishna originates from Mahabaleshwar in Sahayadri. Its tributaries are Koyna, Tungabhadra and Bhima. It drains into Maharashtra, Karnataka, Andhra Pradesh.

It origins from Brahmagiri hills of Kogadu district in Karnataka. Kaveri receives water through southwest monsoon and northeast monsoon also. So less fluctuations in water levels than other peninsular rivers. Drains Kerala, Karnataka and Tamil Nadu. Kabini, Bhavani, Amaravati are its tributaries.

<< Read about list of multipurpose river projects in India here>>