In first sentence, ‘he’ is singular that is why the verb ‘go’ is used in form of ‘goes’. For a singular Subject, singular verb is used. And for a Plural subject, plural verb is used.

Subject Verb Agreement Rules are mentioned below along with relevant examples. They are presented in a simple form for easy understanding. Various questions are asked in English tests asking for correction of error in the given sentences. By understanding these rules about Subject verb Agreement, you will be able to answer majority of the questions arising from this topic. To ensure that you have learnt the concept well, it is recommended that you practice some questions testing this concept. Let us now begin the short session about subject verb agreement in English grammar.

If two or more singular subjects/ nouns are joined by ‘and’, the verb must be plural. For instance;

Time and tide wait for no man.

But, if the two subjects represent one single idea, or to one single person or thing, then the verb has to be singular. For instance;

The poet and philosopher is awarded. (refers to one person)

Bread and butter is a complete food.(refers to single food) 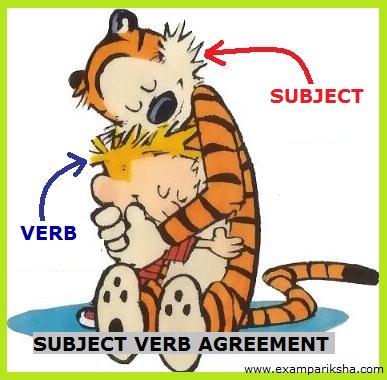 If two singular subjects are connected by ‘and’ preceded by ‘each, every, no’ then the verb is used in singular form. For instance;

Every son and every daughter of the country was a volunteer.

Also, if two or more singular subjects are connected by ‘ or, nor, neither, either..or, neither..nor’ the verb is used in singular form. For instance;

Either he or i was mistaken.

Neither gold or coal is to be found in that state.

When one of the nouns and pronouns that is joined by ‘or, nor’ has singular reference and other has plural, then the verb is placed in accordance with the plural subject while placing that plural subject closer to the verb. For instance;

Micheal or his brothers are to blame.

Neither Atif nor his cousins were present.

But, if two subjects are joined by ‘or, nor’ refers to two different individuals, then the verb used in the sentence is singular. For instance;

Either you or he is telling a truth.

Neither my sister nor I am happy.

Krishna as well as his friend has won the match.

The king with all his ministers was injured.

A collective noun has to be used with a singular or plural verb according to the sense. If the idea conveyed in the sentence is singular, then the verb is singular. If the individuals of the collection are plural in sense, then the verb used should be plural. For instance;

The jury were divided in their opinion. (here jury refers to the men of jury)

The jury has elected its President. (here jury is considered one body)

‘Either, neither, each, every one, many a’ should be followed by a singular verb. For instance;

Either of the two applicants is suitable.

Each of these girls has done her best.

Each one of these men is reliable.

Many a woman is tempted by gold jewellery.

When a plural noun denotes some specific quantity or amount that is considered as a whole, the verb is generally used in singular form. For instance;

Two-thirds of the village is in ruins. (here’are’ is not used)

Five weeks is a good holiday. (here ‘are’ is not used)

Also, this scheme is followed with book titles and names of sciences. For example;

The Arabian Nights is an amazing book.

Physics is a difficult subject.

Agreement of the verb with the subject is important concept in English Grammar. We hope this short post about Subject Verb Agreement will be beneficial for students.