Biosphere -All living components of the Earth. All plants animals and microbes and their surroundings are known as biosphere.

The structure of Biosphere has three components: Abiotic, Biotic and energy components.

I. Abiotic Components: It consists of all non-living elements which are essential for the survival of all living organisms. It has lithosphere, atmosphere and hydrosphere. Mineral nutrients, gases and water are three basic requirements of organic life.

II. Biotic Components: It includes Plants, animals and human beings to make biotic components of environment. there are three sub-system:

III. Energy : It is vital component of biosphere which is essential for reproduction and generation of all biological life on Earth.

Structure and composition of Biosphere

Ecology: Derived from Greek word ‘oikos’ meaning house and ‘logy’ means science. Ernst Haeckel used the term in 1869 for the first time. The study of interactions between life forms and physical environment is known as science of ecology. So, it is the study of abiotic and biotic interactions.

Habitat: It is the totality of physical and chemical factors that constitute the general environment.

Ecosystem: System of biotic and abiotic components inter-related and interact with each. Therefore, an ecosystem involves interactions among different components and flow of energy among these components.

Ecological adaptation: Plants and animals species have got adapted through evolution to different types of environmental conditions.

<< Read about powers of Competition commission of India here >>

1. Flow of Energy in the Ecosystem: It involves transfer of energy from one trophic level to another. Trophic level is the stage at which food energy passes from one group to another. It occurs through the food chain.

Food chain is basically the sequence of transfer of energy from the organisms in one trophic level to another trophic level. It is a fact that the Sun is the major source of energy. The number of organisms at a trophic level depends upon the availability of food at its lower level.

There are two types of organism in food chains: Autotrophs and heterotrophs. Autotrophs have three broad categories of herbivores, carnivores and omnivores.

There are two types of Food chains- grazing and detritus food chain.

The cyclic movement of chemical elements of biosphere between organism and the environment is known as Biogeochemical cycle. It involves movement and circulation of soluble inorganic substances (known as nutrients) that are derived from soil, and atmospheric forms of inorganic substances through organic form of various biotic components. 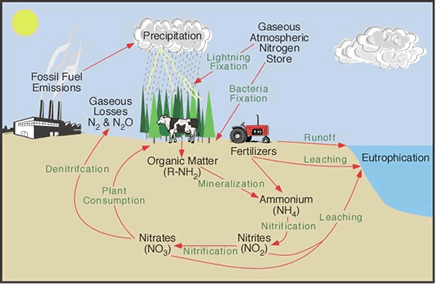 There are two types of Biogeochemical cycles in the description of biosphere:

It helps in exchange of water between air, land, sea and living plants and animals. Solar energy drives the hydrological cycle. It causes massive evaporation, from oceans and other water bodies leading to cloud formation and precipitation. On surface, it acts as freshwater in form of snow, groundwater.

In the structure and composition of biosphere, the Nitrogen cycle plays a very important role. Since Nitrogen is essential for life processes, its continuous supply is maintained by nitrogen cycle in the biosphere. The protein produced by animals and plants during their  metabolic processes leads to formation of organic compounds of nitrogen. A major amount of nitrogenous organic residue in soil has its origins in dead and decayed plants and excreta of animals. These organic residues in the soil are then taken up by soil micro-organisms which  break down the soil nitrates into nitrogen by the process of denitrification while others transform nitrogen in form of soluble nitrogen compounds.

The atmosphere acts as a minor reservoir of carbon while the hydrosphere is major reservoir. It contains  approximately 50 times more carbon than atmosphere in the form of bicarbonate mineral deposit on the ocean floor. The cycle operates by exchanging carbon between hydrosphere, atmosphere and biosphere.