Amaravathi is the temple town, situated on River Krishna bank in Andhra Pradesh. Amaravati has lately been in much news in terms of being the likely capital of Andhra Pradesh.

This makes the history and significance of Amaravathi an important topic for competition examinations. This article is written to cover the topic holistically to be able to answer all questions that may arise from this topic.

Amaravati is located 32 km from Guntur and 39 km from Vijayawada in Andhra Pradesh on the right bank of river Krishna.

Amaravathi is one of the few places where the river flows north instead of south or east. This has been considered auspicious. The Satavahanas chose Dharanikota to build their capital, at two km from Amaravathi town, over two thousand years ago.

History of Amaravathi, the Imperial City

The recorded history of Amaravati and Dharanikota is from 2nd century BCE. It was the telugu capital of Andhra Satavahanas who ruled from 2nd century BCE – 3rd century CE. The Satavahana era lied in between the Maurya and Gupta eras. They ushered in Post mauryan period and had cultural impact on people of Andhra, Maharashtra, Karnataka, Gujrat and Madhya Pradesh significantly. Satavahanas preserved Hinduism and also fostered Buddhism presenting a wonderful example of openness and enlightened thinking. 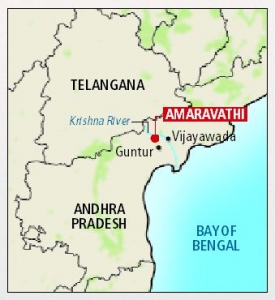 cceeded the Mauryas. Satavahanas also contributed to Buddhist art and architecture after Ashoka the Great, the Satavahanas were the ones who built imposing stupas in the country, particularly in the Krishna river valley.

After decline of Satavahanas, Andhra Ikshvakus came to rule the Krishna river valley region followed by Pallava kings. Subsequently, Eastern Chalukyas and Telugu Cholas controlled the region. In medieval times, the Kota Kings were in control of Amaravati who were later subdued by Kakatiyas in 11th century CE. Later Amaravati became part of the unified Telugu empire under the Vijayanagara empire.

How Amaravathi is a melting pot of religions:

The Satavahanas were patrons of Hinduism, the ancient temple of Amaralingeshwara (Shiva) gave the name of Amararamam to the city.

Hence, the city of Amaravathi is named after Amareswara Swamy Temple, which is one of the Pancharamas. Amaravati is also known as ‘Punyakshetra’.

The legend of Amaravati:

When Subramanya (Shiva) killed the demon Tarakasura, the Shivalingam in his throat broke and fell in five different spots, which became the ‘Pancharama-kshetras’. The foremost of these is Amareswara at Amaravati where ‘Indra’ and the ‘Devas’ are believed to have worshipped Shiva.

Amaravati was a seat of Buddhism prior to the rise of Satavahanas, and a stupa and monastery were built there during the reign of Emperor Ashoka (269-232 BC) under Mauryan empire.

The great stupa or Mahachaitya at Amaravati was one of the biggest in Andhra Pradesh with a probable diameter of 50 meters and a height of 27 meters.

According to ‘Vajrayana’ buddhism traditional sources, the Buddha preached at Dharanikota (Dhanyakatakam) and also conducted the ‘Kalachakra’ ceremony. This legend takes the antiquity of Amaravati back to 500 BCE.

Taranath, the Buddhist monk of tibetan buddhism writes in his History of Buddhism: “On the full moon of the month Chaitra in the year following his enlightenment, at the great stupa of Dhanyakataka, Buddha emanated the mandala of “The Glorious Lunar Mansions” (Kalachakra). This description shows that Dhanyakatakam (Amaravati) was a very significant place marking the origin of many Buddhist Tantric teachings especially, Kalchakra.

Amaravati school of Architecture: The Amaravati Buddhist sculptures are famous for their uniquness. There have been slabs with Buddhist inscriptions as found in the Buddhist shrine of Amaravati. It is home to best known 2000 years old Buddhist relics, which makes the place an important pilgrimage centre for the Buddhists. The Amaravati Mahachaitya (The Great Stupa), was built around the 2nd century.

The Amaravati stupa  must have been the largest stupa in the whole country. Earlier structure of the stupa was a simple structure, with limestone crossbars and simple carvings, but was later renovated by the Satavahana rulers, after which it became a highly marked architectural monument. Amaravathi Stupa is also believed to have been constructed with the efforts of the great saint, Acharya Nagarjuna.

About Amaravathi Stupa : The stupa found to be engraved with intricate carvings depicting the life and teachings of Lord Buddha. This is a Sariraka type of stupa and hence it’s of great importance.Mahastupas are known as ‘Sariraka Stupa’ (containing buried bodily remains of Lord Buddha), Other type of Stupa are: Paribhogika stupa (containing buried belongings of the Buddha).

A legend says that, after the death of Buddha his remains were kept at eight places in stupas by his disciples. But Ashoka, when embraced Buddhism after the great Kalinga war in 3rd century BC, had removed the relics. He is believed to have kept the remains of Buddha at 84,000 places in the world in order to spread Buddhism across the globe.

In conclusion, Amaravati was a place of ancient worship for followers of different faiths.