India after Mauryas was a not a very remarkable period for political solidarity but it saw development of Indian culture to a great extent. There were invasions from various foreign tribes but the Indian society absorbed these infiltrators and continued its development by making alterations and additions in itself. This period proved the strength of Indian culture and society to withstand invasions.

After the successors of Ashoka failed to keep the empire intact, various small kingdoms emerged in the face of Indian subcontinent. The Mauryan Dynasty was soon replaced by the Sunga dynasty.

The founder of Sunga dynasty was Pushyamitra Sunga(187-151 BC). He had assasinated the last Mauryan ruler, Brihadratha to capture the throne. By this time much of the Mauryan empire was disintegrated. 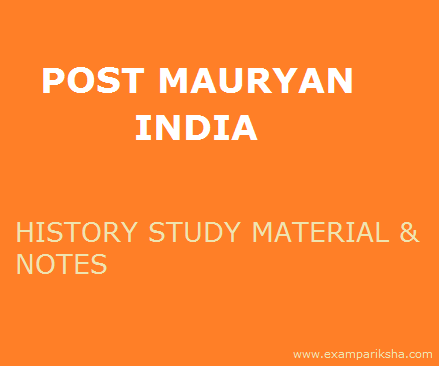 After the death of Pushyamitra, his son Agnimitra became ruler. He conquered the Vidarbha area.

The last ruler of Sunga dynasty was their 9th ruler, Devabhuti. He was murdered by his minister Vasudeva Kanva.

Importance of Sunga Rule: The Sunga defended the Gangetic valley from foreign invasions. They revived the Brahmanical traditions(Ashwamedha). They also promoted other religions and Sanskrit language.

It was founded by Vasudeva Kanva. This dynasty was Brahmin in caste, believed to be descendents of Rishi Kanva. The kingdom at the time of Vasudeva Kanva was much reduced in its extent. Not much is known about the rulers of this dynasty. The last king of Kanvas was Susarman.

After the decline of Mauryan Empire in Deccan, the Satavahanas became politically prominent in the middle of the 1st century BC. They were the most important native successors of Mauryas.

After death of Alexander in 323 BC, various Greeks settled on the north-western boarder of India in the present day north of Afghanistan. It should be noted that the rulers of Bactria are called the Bactrian-Greeks, because they were Hellenistic (Greek) in their ancestry.
During the time of Pushyamitra Sunga the invaders were ruled by Demetrius. However, the most revered Indo-Greek ruler was King Menander. His empire included the southern Afghanisthan and Gandhara region( to the west of Indus). He has been referred to as king Milinda who finds mention in the famous Buddhist text ‘Milindapanho’ -in which philosophical questions asked by Milinda to Nagasena (the Buddhist author of the text) are described in detail.The capital of his kingdom was Sakala (Sialcot). He later embraced Buddhism. Also, a Greek ambassador Heliodorus adopted Vaishnavite religion and erected the Garuda Pillar at Besnagar. The Greek influence in India then lasted for more than a century after the death of King Menander.

The Sakas also known as the Scythians captured Bactria from the Greek rulers and followed the footsteps of the Greeks to extend their rule over the northwestern parts of India. There were two distict groups of Sakas – Northern Satraps who ruled from Taxila ; and the Western satraps who ruled over Maharashtra. The founder the Saka rule in India in the 1st century B.C. was Maues. And his successor Azes I, is considered to be the founder of the ‘Vikrama era’.
The most famous of the Shaka rulers was Rudradaman I who ruled in the middle of 2nd century AD. He is known to have undertook the repairs of the Sudarshana Lake, which was originally built during the reign of Chandragupta Maurya. This has been mentioned on an inscription which he got engraved at Girnar/Junagarh in Gujarat. This inscription is the first royal inscription of India which is composed in chaste Sanskrit.  Saka rulers of Taxila were overthrown by the Parthians.

The Parthians were Iranians in origin and had strong cultural connection with the Shakas,. Thats why these both  groups are referred to as ‘Shaka-Pahlava’. The inscription that indicates the Parthian rule in the northwestern area of Pakistan is the ‘Takht-i-Bahi’ inscription at Mardan near Peshawar. It is dated in 45 AD, and refers to Gondophernes /Gondophares as a Parthian ruler. He is believed to have taken up Chritianity by association with St. Thomas.

The Parthians were followed by the Kushanas alos known as Yuehis or Tocharians. They were one of the five clans in the Yuechi tribe. And there were two successive dynasties in the Kushanas.

The first dynasty was founded by Kadphises, who ruled for 28 years from A.D. 50. This had two Kings, Kadphises I and II or Vima Kadphises. Kanishka was the greatest Kushana king who spread his kingdom beyond the western Himalayas also. He popularized Buddhism in Tibet, China, and Central Asia.