The Earliest known works of Indian literature was Rig Veda, which is a collection of 1028 hymns written in Vedic Sanskrit.

The Rig Veda was followed by Yajur Veda, Sama Veda, and Atharva Veda. There are other works after Vedas known as Brahmanas and Aryankas followed by philosophical doctrines of Upanishads. These form the part of Shruti literature.

Another type of work that emerged in early period was Vedangas: contains astronomy, grammar, and phonetics. For example, Ashtadhyayi written by Panini is work on Sanskrit grammar.

There are two epics from Ancient Indian Literature, Ramayana and Mahabharata. These have developed to their present form over centuries, hence, they represent the ethnic memory of the Indian people. They were transmitted orally over the time by singers and story-tellers and were probably put to their written from around 2nd century BC.

Ramayana is composed of 24000 verses which are spread across seven books referred to as Khandas. It is written in form of poetry which entertains while it instructs. It is the story of Rama, and tells how to achieve the fourfold objectives of human life(Purushartha), namely, Dharma, Artha, Kama, Moksha.

Mahabharata consists of one lakh verses which are spread across ten books, hence, it the longest poem in the world. It is considered to be Ithihasa Purana, meaning Mythical history(because this history is not merely the depiction of events that happened, but these are the vents that will always happen and repeat). It is written by Vyasa, about the story of war of succession to that throne between Pandavas and Kauravs with multiple stories interwoven together to form an epic. Along with the main story of war, a later addition of Bhagvad Gita enshrines an integrated view of Dharma (performance of righteous duty in selfless way of Nishkama Karma). 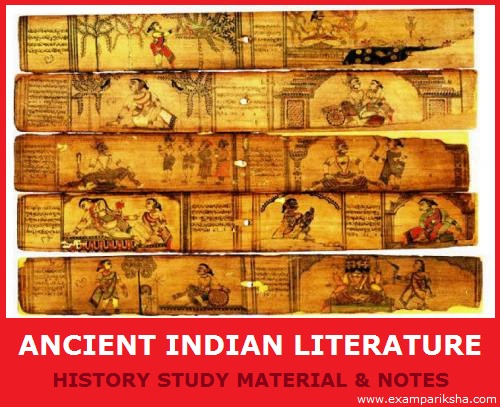 They helped in development of early Vedic religion towards Hinduism. the literal meaning of the word “Purana” means” to renew the old”. They were written to illustrate the truth of Vedas to the people. Puranas explain the philosophical and religious truths through popular legends and mythological stories. Combined with the Ithihas(Ramayana and Mahabharata), Puranas consist of many stories and anecdotes of religious, social and cultural history of India.

Shastras contain work of philosophy and science. they covers areas like art, mathematics and other sciences. Arthashastra is a work on science of governance.

Smritis deal with the performance of duties, customs and laws that are prescribed in accordance with Dharma. Manusmriti is the most important example, known as laws of Manu.

The earliest Buddhist literature is written in Pali language. The Sutta Pitaka consists of dialogues between the Buddha and his followers. The Vinaya Pitaka deals with rules of organisation of the monastries.

Milindapanho is a work of dialogues between buddhist Nagasena and Indo-greek king Menandar. The Jatakas are another important contribution to the early Buddhist literature consisting stories that have also been incorporated in a number of sculptures.

Buddhacharita on life of Buddha is written by Ashvaghosha is a work in Sanskrit language.

A number of literary works have been written just prior to the beginning of Gupta age which had secular character. this period saw development of poetry and drama. The subject of these works were majorly political events, allegories, comedies, romances, and philosophical questions.

There were also a large number of philosophical literature. Most important ones are those of Sankaracharya. There are collections of stories in Panchatantra and Kathasarit-sagar.

In Southern India, the ancient Indian writings were written in four Dravidian languages which developed their own script and literature, these are, Tamil, Telugu, Kannada, Malayalam. Among these, Tamil is the oldest with literature dating back to early centuries of Christian era. This developed during the three Sangams(assemblies of poets and writers) held during different times. The Sangam literature covers themes of war, love and politics to a great extent.

Tolkappiyam and Ettutogai, Pattuppattu are important works of these times. Thiruvalluvar is the most famous author of these times who wrote Kural, which deals with many aspects of life and religion.