The period under the Gupta empire is known as the Golden age of Ancient India. This is rue for the Northern region of the country, where the Hindu Culture was finally established in its full glory.

The rulers of Gupta Dynasty are given in detail here.

Developments in Administration during Gupta Period:

According to various inscriptions, the Gupta kings assumed titles such as – Paramabhattaraka, Maharajadhiraja, Parameswara, Samrat and Chakravartin.

Developments in Social Life during the Guptan Empire:

During the Gupta period, the caste system or varna system had become rigid and the Brahmins occupied the top position in the society. Rulers and other wealthy people gave enormous gifts to the Brahmins.

The practice of untouchability had begun during Gupta period. The Chinese traveller Fahien mentions that ‘Chandalas’ were segregated from the society. And the progress of Brahmanism led to the  neglect of Buddhism and Jainism. The Religious literature like Puranas was composed during this period.

Position of Women: It became miserable during the Gupta period. Women were prohibited from studying the religious texts such as Puranas. The subjection of women to men was highly regularized. The practice of ‘Swyamvara’  was given up and Manusmriti suggested early marriage for girls.

Trade & Commerce: The International trade with Romans flourished during Gupta period. Ujjain had become a major commercial centre. The organisation of traders and artisans into ‘Guilds’ were formed. The presence of these guilds have been testified on various inscriptions like on Indore Copper plate inscription has mention of a guild of oilmen(teli). And Mandsor inscription has mentions of guild of silk weavers.

During the reign of the Guptas, the Brahmi script evolved into Nagari script. Sanskrit as the language saw its golden age during the Gupta period. There were numerous works written in classical Sanskrit in the forms of epic, lyrics, drama and prose. Puranas, smiritis and Dharmashahstras were composed. The 18 Puranas (important ones are Bhagavatha, Vishnu, Vayu and Matsya Purana) in their present form were composed during this period.  And the Mahabharatha and the Ramayana were given final touches during this period.

Samudragupta, himself a great poet, patronized scholars including Harisena. While, Chandragupta II’s court was adorned by the celebrated ‘Navratnas’ including Kalidasa.

Aryabhatta, the great mathematician and astronomer who wrote the book Aryabhatiya in 499 A.D. The book explains the occurrence of solar and lunar eclipses scientifically. He was the first to declare that the earth was spherical in shape and rotates on its own axis.

Varahamihira composed Pancha Siddhantika, on the five astronomical systems. His Brihadjataka is a standard work on astrology. His other work Brihadsamhita is considered a great work in Sanskrit literature dealing with a various subjects like astronomy, astrology, geography, architecture,animals, weather, omens and marriage.

In the field of medicine, Vagbhata lived during Gupta period. He was the last of the great medical trio of ancient India after Charaka and Susruta who lived before the Gupta age. Vagbhata was the author Ashtangasamgraha (Summary of the eight branches of medicine).

The Gupta Coins:  Samudragupta issued eight types of gold coins. Chandragupta II and his successors had also issued gold, silver and copper coins of different varieties.The general scheme on these coins was to exhibit the portrait of the king on one side of the coin and an appropriate goddess(Lakshmi or Saraswati) with her associated symbols on the other side of the coin.

Sculptures:  Various images of Buddha from Sarnath are fine examples of Gupta sculpture. The school of art that thrived at Sarnath produced graceful images of the Buddha. There were several images of Hindu Gods and Goddesses created during this period. 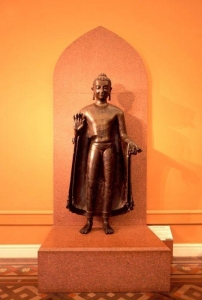 The Sultanganj Buddha – a 2 metre high bronze image of Buddha that was discovered  at Sultanganj (located near Bhagalpur in Bihar) is now in the Birmingham Museum. The craftsmen were efficient in the art of casting metal statues as well as pillars. The Delhi Iron pillar of the Gupta period still stands free from any rust even though it has been completely exposed to sun and rain for so many centuries.

During the Gupta period both the Nagara and Dravidian styles of architecture. However, most of the architecture of this period has been lost due to foreign invasions of Huns. Therefore, Archaeological evidence about Gupta architecture is however poor. 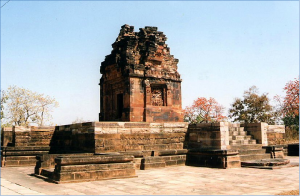 The Dashavatara temple at Deogarh is an example of Gupta architecture. It is mainly made of stone and bricks. The examples of shrines in Gupta period have been discovered in the jungles of Central India, particularly in  the Bundelkhand region like the one at Bhitargaon in Kanpur district. There are also other temples located at –

Painting as an art form reached a high degree of perfection during the Gupta times, it is evidenced by the wall frescoes at the Ajanta caves (Aurangabad) and the one at Bagh caves (near Gwalior).

The Ajanta paintings primarily belong to the period between the first to seventh century AD yet most of these were produced during the Gupta period. These paintings primarily depict various scenes from the life of Buddha. The paintings that have survived the centuries in Ellora and Bagh Caves are also of high standard.

<< Click here to read about Types of Soil in India >>