Foe every nation which considers itself sovereign, there are individuals responsible for maintaining the security and sovereignty of the country. It is therefore, important and natural for the State to recognize and reward the acts of bravery and gallantry. To serve this purpose, Independent India has instituted various awards and honours for deserving individuals. These are Param Vir Chakra, Maha Vir Chakra, Ashoka Chakra, Kirti Chakra, and Shaurya Chakra.

The following awards are given for valour exhibited in face of enemy in battlefield. These

It is the highest decoration of valour, that is awarded for the most conspicuous bravery, some daring, prominent act of valour or self-sacrifice in the presence of the enemy on land, sea or air. It is the highest Award to be conferred in War.

The decoration of Param Veer Chakra is worn on left breast with plain purple coloured riband of given width. The decoration of PVC is made of circular bronze structure with different details embossed on both sides.

So far, since its inception, 21 Param Vir Chakra Award has been conferred upon the Brave Sons of the nation. 14 of them have been awarded posthumously.

Mahavir Chakra is the second highest decoration in India. It is awarded for acts of conspicuous gallantry in the presence of the enemy, weather on land, sea or air.

The decoration is made of standard silver in circular shape. It has “Mahavir Chakra”  embossed in Hindi and English. It is worn on left breast with a half white and half orange riband with orange being near the left shoulder.

So far, 155 Mahavir Chakra Award have been conferred.

Vir Chakra is third highest decoration awarded for acts of gallantry in the face of the enemy on land,sea or air.

The decoration of “Veer Chakra” is made of standard silver with circular shape with its name embossed in Hindi and English.  It is worn on left breast with half blue and half orange riband, where orange is nearer the left shoulder. 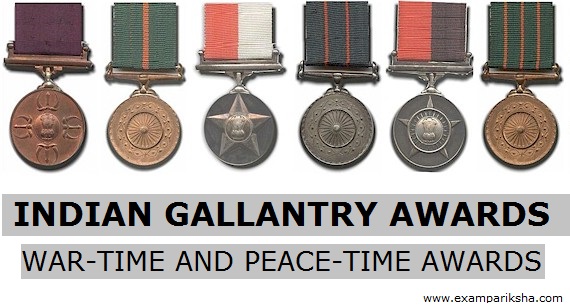 The following awards are given for services rendered during peace time.

Ashok Chakra is the highest Peacetime gallantry award,  equivalent to Param Veer Chakra. It is awarded for the most conspicuous bravery, daring act of valour, or self-sacrifice on land, sea, or air.

Apart from members of armed forces, paramilitary forces, police forces, civilians from all walks of life are also eligible for this award.

It is worn on the left breast with a green silk riband with orange vertical line in middle. The Ashoka Chakra is made of gilt gold and circular shape with Ashoka Chakra embossed on one side and a replica of Ashok Chakra on obverse.

Till date, 63 people have been awarded with Ashoka Chakra by the President of India.

The Kirti Chakra is awarded for conspicuous gallantry. It is made up of standard silver in circular shape. It is worn on the left breast with green silk riband divided into equal segments by two orange vertical lines.

Earlier it was known as Ashoka Chakra class II, before 1967.

The Shaurya Chakra is awarded for an act of gallantry. It is exactly like the Ashok Chakra, except that it is made of bronze. Even civilians are also eligible for this award. Earlier it was known as Ashok Chakra Class III.

Shaurya Chakra is worn on left breast with a green silk riband, it was divided into four segments by three orange vertical lines.

<< Read about Rivers in India here>>