The Kushanas had originally belonged to the regions of western China. They are also known as the ‘Yuehchis’.  The Kushanas defeated the Shakas and the Pahlavas/Parthinians and went on to create a big empire in Afganistan, Pakistan and Northern parts of India.

The first important ruler of the Kushana dynasty was ‘Kujula Kadphises’ or Kadphises I. He occupied the valley of Kabul and had also issued coins in his name. He was then succeded by his son, Wima Kadphises or Kadphises II. He had conquered the areas of Northern india till Mathura. He had issued coins proclaiming himself as a Shiva devotee and as the ruler of whole world.

There after the Kushana empire was ruled by Kanishka. He is considered the most important ruler of the Kushana dynasty.

Kanishka usurped the throne in AD 78, and then started a new era, what is known to us as the ‘Shaka era’. Under the rule of Kanishka, the Kushana empire reached its maximum territorial limits. This empire extended from the Central Asia to the northern India, while including Varanasi, Kaushambi and Sravasti in Uttar Pradesh region.

The political significance of Kanishka’s rule is largely due to his achievements in form that he integrated central Asia with north India under a single empire. This allowed for intermingling of different distinct cultures and also increased the inter regional trading activities.

Kanishka remains famous in history as the great patron of Buddhism. He is credited with convening the fourth Buddhist Council at Kundalavan, located at present day Harwan near Srinagar in J&K. In this 4th Buddhist Council, a large number of Buddhist scholars took part. This council is im,portant in the history of Buddhism for the developments. In this council that Buddhism got split into two different schools – Hinayana and Mahayana. About 500 monks had attended the Council. This Council had prepared an authoritative commentary on the Tripitakas and the Mahayana doctrine was given final shape here.

Kanishka is also known to patronize the Gandhara and Mathura schools of sculptural art . He also built a giant stupa to house the Buddha’s relics in the his capital city of Purushpura located at present day Peshawar. That building was intact in its magnificence when the Chinese pilgrim Fahien had visited that area when he arrived in the early 5th century AD. The Kushana power had gradually declined from the early 3rd century AD.

Kanishka had also sent missionaries to the Central Asia and China to propagate the new faith of Buddhism. The Buddhist chaityas and viharas were also built in different places. He also patronised the Buddhist scholars – -Vasumitra, Asvagosha and Nagarjuna. It should be noted that Asvagosha was a great philosopher, poet and dramatist of his time. He was also the author of Buddhacharita. While Nagarjuna came from south India, he adorned the court of Kanishka. 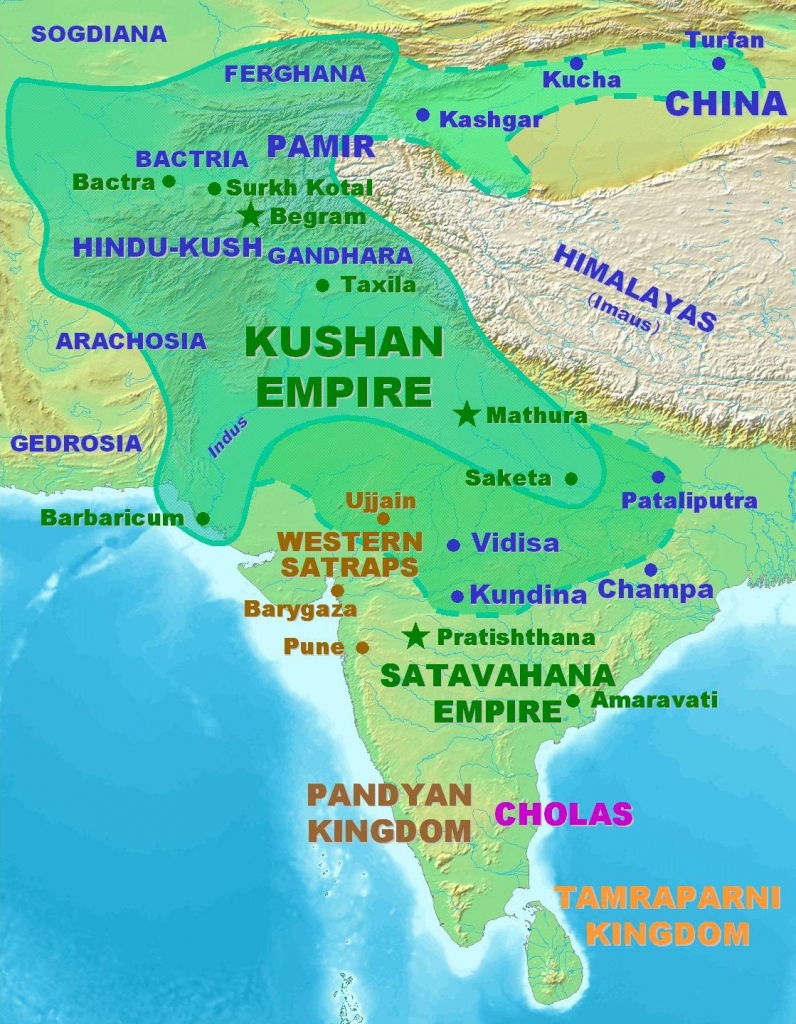 Nothing much is known about the administrative machinery of the Kushanas. Perhaps the whole empire was divided into provinces, each ruled by a mahakshatrapa ( a military governor), who was assisted by a kshatrapa; but how many provinces were there in the empire, is not known. Sources indicate that Kushana horsemen wore trousers while riding. A headless statue of Kanishka found at Mathura reflects the same. A prominent feature of Kushana polity was the title of devaputra , i.e., son of God, used by the Kushana kings. It indicates the claim to divinity by the Kushana kings.

The Contributions of Kushanas:

The Kushanas occupy a special place in the ancient Indian history because of their contribution to various aspects of life. Their vast empire helped in the growth of internal and external trade. It resulted in the rise of new urban centres. The rich state of economy under the Kushanas is also evidenced by the large number of gold and copper coins that they struck. Even in literature and medicine, India made progress. Charaka, known as father of
Ayurveda, wrote a book on medicine called Charaksamhita whereas Asvaghosha, a Buddhist scholar, wrote
Buddhacharita, a full length biography of the Buddha. Both these scholars were believed to be the contemporaries of king Kanishka. The Kushanas patronized the Gandhara and the Mathura schools of sculptural art which are known
for producing the earliest images of Buddha and Buddhisattavas.

The Successors of Kanishka and the End of Kushana rule:

The successors of Kanishka had ruled for another one hundred and fifty years. His son Huvishka kept the empire intact. While Mathura became an important city under his rule, like his father Kanishka he was also a patron of Buddhism religion.

The last significant Kushana ruler was Vasudeva. The Kushana empire got much reduced in his rule. Various inscription with his name are found in and around Mathura. He was a worshipper of Siva. And after Vasudeva, petty Kushan princes ruled for sometime in northwestern India after which the empire faded away.