Upon reading the following group of words, you would understand some meaning conveyed:-

from the above, we can conclude that a group of words which makes complete meaning is called a sentence.

The formation of sentence causes difference in meaning. Sentences are classified on basis of their uses in English language. To introduce English grammar, it is essential to understand the usefulness of sentences along with their kinds. The types of sentences are described in brief in the following part.

Let us first discuss the purpose served by different sentences. A sentence is used for following purposes.

The above mentioned purpose of sentences point towards four distinct types of functions performed by sentences. Therefore, sentences can be of following four types:

2. Interrogative Sentence: these are sentences that asks a question. 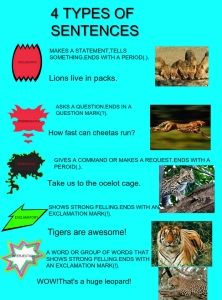 3. Imperative Sentence:  these are sentences that expresses a command or an entreaty.

4. Exclamatory sentence:  these are sentences that expresses strong feeling.

Therefore, a sentence has the following two things

Usually the subject of the sentence comes first followed by the predicate.

<< Read about list of banking and finance committees here>>

Phrase is that part of sentence which makes sense, but not complete sense. These are a group of words. For instance,

Here, in first example, the highlighted part does convey a meaning but does not makes complete sense. They are phrases.

Clause is that group of words that forms a part of sentence, while containing a subject and a predicate. For instance,

In the above example, there is a subject in the highlighted part along with a predicate. Therefore, they are considered a clause.

<< Read about powers of Lok Sabha in Indian Polity here>>