Art and culture in the post Mauryan period was primarily with religious undertone. The two most important features that characterise art and architecture of this period are the construction of Stupas, and the development of regional schools of Sculpture. These topics remain a favorite of various examiners also. Therefore this article will serve as good revision tool.
The idols of Buddha were carved out for the first time in this period of Ancient Indian history. Due to contact with the foreigners coming from northwest, a specific distinct school of art known as the ‘Gandhara School of Art’ also developed in this period. This school of sculpture was influenced by the Greek and Roman styles/art forms.

Basically, A stupa is a large hemispherical dome having a central chamber in which the relics of Buddha or some prominent Buddhist monk were kept inside a small casket.
The base of stupa was surrounded by a path meant for clockwise circumambulation/pradakshina. It was enclosed by a wooden railing, which later developed to be made in stone.
Three prominent stupas belonging to this period are located at Bharhut and Sanchi, both fall in Madhya Pradesh, were originally built by Ashoka but were subjected to enlargement later.
The Bharhut Stupa in its present form and structure was from middle of 2nd century B.C. It has important sculptures and its railings are made of red stone.
At Sanchi, three big stupas were constructed in this period. The biggest was built originally by Ashoka, and later enlarged to double its size.
Other Stupa are located at Amravati and Nagarjunkonda, both in Andhra Pradesh.
The Amravati Stupa, attained its final shape in the 2nd century A.D.
It should be noted that the sculptures on the stupas are based on themes of Jataka and other Buddhist stories. 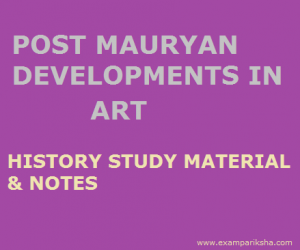 << Read about the functions of National disaster management authority here >>

The post Mauryan period marks a progress in the rock cut architecture apart from stupas. A large number of temples and halls as well as places of residence for monks were made in this period. These structures were cut out of the solid rocks near Pune and Nasik in Maharashtra, this was under the Satavahanas. The places of worship generally had a shrine cell with a large stupa that are placed in the centre. These places was known as Chaitya and the rock cut structure that are used as the residence for monks were called a Vihara.

The 1st century had witnessed the division of Buddhism in two different sects of Hinayana and Mahayana. The Mahayana Buddhism then encouraged Buddha’s worship like a god in human form. Thus as a result, a large number of Buddha images were constructed in different regions across India. There were three major schools for sculptural art and culture, which developed in this period. These schools are – the Mathura school of art, the Gandhara School of art and the Amravati school of art.

The Mathura School of Art:

This prominent school of art developed at Mathura in UP. The Mathura school’s major contribution  to the contemporary art was the type of images of Buddha which were created as the precedent of the art form. The Mathura artists were using local red stone which had black spots to create the Buddha images.
The Mathura school yielded a large numbers of sculptures of Jaina deities as well besides the ayagapatas(stone slabs)  to place objects of worship on them.
There was Brahmanical influence on the art of Mathura school, which is evident in the sculptures. Also, during the Kushana period a number of sculptures of brahmanical deities were also carved, like Kartikeya, Vishnu and Kubera. These show that Brahmanical influence.
>>Read More about Post Mauryan India here<<

The Gandhara School of Art

The Gandhara School of art deveolped around the area surrounding Peshawar. This school of art was at its peak during the 1st and 2nd century A.D.
This region had seen successive rule of the Greeks, the Mauryas, the Sungas, the Shakas, and the Kushanas for many centuries. This gave a distinct character to the Gandhara school of art.
Since it began around the Christian era, it has also been known as Graeco-Roman, Indo Greek, Graeco-Buddhist art form because it has all the influences coming from the Roman, Greek and Indian styles.
The theme of sculptures in Gandhara school is predominently Buddhist ,but the style is Greek.
The chief patrons of the Gandhara school of art were the Shakas and the Kushanas. The stones used for making the  idols of Buddha and Bodhisattava was primarily blue-grey schist.
The chief characteristics of the Gandhara school of art is its beautiful portrayal of human figures complete with distinguished muscles of the body.
In the sculptures, Buddha is depicted with a distinct type of garment draped in Graeco-Roman fashion, with very  curly hair. These beautiful images are considered the best pieces of sculptures of Buddha.

The Amravati School of Art:

The Amravati school of art had flourished in Andhra Pradesh region located between the lower valley of river  Krishna and Godavari.  Major patrons of Amravati art form were the Satavahans of Deccan, but it continued even later.
This art flourished between 150 BC and 350 AD. The sculptures of Amravati school of art are mainly found located on the railings, the plinths and other such parts of the stupas.
The representations on the sculptures include the themes of stories from the life of Buddha. That is why an important characteristic of the Amravati school is its ‘narrative art’.
There are medal- lions carved in a particular manner that they depict an event in a very natural way. For instance, one of the medallion depicts a whole story about taming of an elephant by Buddha.
Another significant feature of the Amravati art is-  use of white marble for carving the figures of humans. The specific emphasis on human figures over the nature is also a distinct feature of the Amravati art school.
<< Read about the geomorphic processes of earth here >>