National income estimates are the most reliable macroeconomic indicators of an economy. Therefore, it is essential for students to be aware of National Income Concepts. Changes in national income measure the rate of growth of the economy.

The task of preparing national income estimates has been assigned to the Central Statistical Organisation (CSO). The CSO has been producing annual official estimates of national income of India since 1955 and publishing the same in its annual report National Accounts Statistics.

<< Read list of Countries their currencies and capitals here>>

Here, we discuss them and other related terms in a very objective way.

1. Factor cost is the input cost that producer has to incur in the process of production. It includes cost of capital – loan inetrest, prices of raw materials, labour, power, rent, etc. Can be termed as Production cost.

2. Market cost is calculated after adding indirect taxes to the factor cost of the product. It is basically the cost at which the goods reach the market. Also termed as EX-FACTORY PRICE. In India we calculate income at factor cost because of non-uniform taxes.

The National Income concepts include the following important terms:

<< Read about functions of SEBI here>>

Gross domestic product is the value of all final goods and services produced within the boundary of a nation during one year. In India one year means from 1st April to 31st March of the next year.
GDP calculation includes income of foreigners in a Country but excludes income of those people who are living outside of that country.

NDP is calculated by deducting the depreciation of plant and Machinery from GDP.

GNP is the value of all final goods and services produced by the residents of a country in a financial year (i.e., 1st April to 31st March of the next year in India).

While Calculating GNP, income of foreigners in a country is excluded but income of people who are living outside of that country is included. It is the GDP of a country added with its income from abroad.

GNP = GDP + X – M
Where,X = income of the people of a country who are living outside of the Country

and     M = income of the foreigners in a country

Intermediate products = one production unit purchasing from other for resale

Final product = all goods and services purchased for consumption and investment , and not for resale

Net National Product (NNP) in an economy is the GNP after deducting the loss due to depreciation.

Closed Economy: An economy that does not maintain any economic relations with the rest of the world. Economic Goods: Those goods which are scarce in supply and, hence, command a price.

Economic Growth: A sustained increase in real national income of a country.

Nominal National Income: The money value of all the final goods and services produced in an economy during a year, estimated at current prices.

Real National Income: The money value of all the final goods and services produced in an economy during a year, estimated at some fixed prices.

Why should we calculate national income? 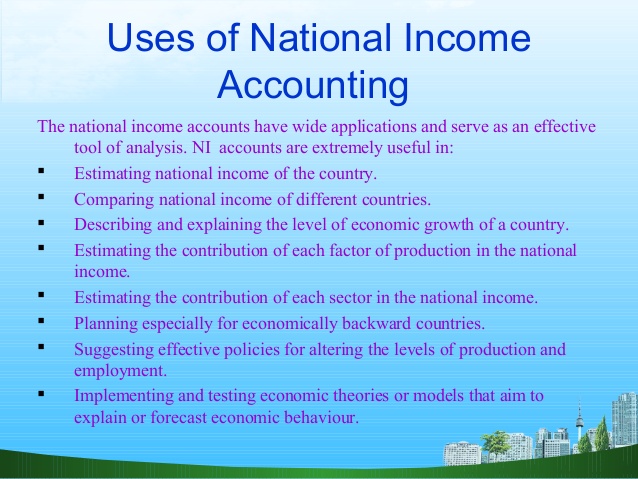